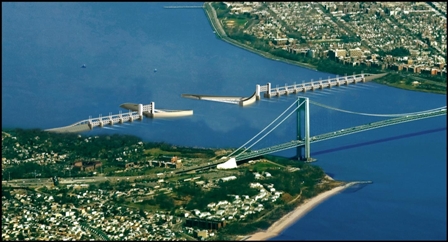 Policy makers and environmental, planning, and engineering experts from around the world convene to compare and assess the mitigation and adaptation policies of three major world coastal cities, each with a Dutch heritage: Rotterdam, Jakarta, and New York City

With a focus on international examples of concrete adaptation measures, the workshop’s participants will discuss the development and implementation of strategies to mitigate flood risks and protect communities and infrastructure in coastal cities. In particular, experts will be comparing measures undertaken to reduce the risks and consequences of climate change in the cities of Rotterdam, Jakarta, and New York.

“Adaptation and mitigation strategies can be designed to avoid the worst of poor land-use planning, or minimize its consequences in the case of storms and flooding,” says Dr. Malcolm Bowman, professor of physical oceanography at Stony Brook University’s School of Marine and Atmospheric Sciences.

The year 2009 is the 400th anniversary of the English explorer Henry Hudson’s voyage up the Hudson River, a journey to search for the north-west passage to the Indies. It was funded by the Dutch government at the time. So it is timely that Connecting Delta Cities will bring together Dutch and American experts from various universities, governmental agencies and consulting companies to explore common problems and potential solutions to climate change-related threats to the future viability of these three cities.

“We must not hide our collective heads in the sand and imagine that the circumstances that might lead to catastrophic flooding in a heavily populated urban area such as New York City or southern Long Island will never happen,” says Dr. Bowman. “Floods are certain to occur; the question is what we are going to do to protect ourselves when it does happen.”

The workshop will include discussion of evacuation schemes, barrier construction, elevation of critical infrastructure, improved scientific understanding of storm surges, and communications with emergency personnel, civilians, schools, hospitals, and companies, plus post storm-event measures such as insurance and emergency relief. Experts will also focus on innovative architecture for the new age, and how to change the public perceptions of what climate adaptation policies are and how to develop new strategies for communicating these plans to the public.


About the Cities — Rotterdam

Rotterdam is a highly sophisticated European city, second largest in The Netherlands, and one of the world’s largest seaports, but is worryingly located several feet below sea level. The city is kept dry by huge sea walls, pumps and storm surge barriers.


About the Cities — Jakarta

Jakarta was the capital city of the Dutch East Indies for 350 years. It is a vast developing Asian city with great ranges of wealth and poverty, with many people living in subsistence conditions along its congested shores and polluted estuaries. It is highly vulnerable to climate change and rising sea level.


About the Cities — New York City

The Dutch settled New York City in 1615 and enjoyed sovereignty for only 65 years before the British invasion. Even so, evidence of Dutch culture is found everywhere. Although New York City is located above sea level, much of its critical infrastructure (trains, subways, tunnels, water reticulation, sewer systems, heating/cooling and telecommunications facilities) lie below the sea.