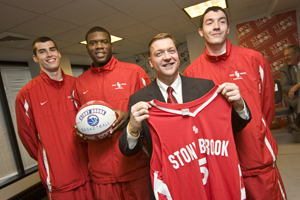 STONY BROOK, NY, May 5, 2009 – The Board of Trustees of the State University of New York voted unanimously today to name Dr. Samuel L. Stanley Jr., Vice Chancellor for Research and professor in the Department of Molecular Microbiology at Washington University in St. Louis, as the new President of Stony Brook University.


Dr. Stanley’s appointment – which is effective July 1 – was announced officially by John J. O’Connor, Officer in Charge and Vice Chancellor and Secretary of the University, and SUNY Chancellor-Elect Dr. Nancy L. Zimpher, following the SUNY Board meeting here.  He becomes the fifth President of Stony Brook, succeeding Dr. Shirley Strum Kenny, who is retiring after 15 years in the position.

“Hearty congratulations and a warm welcome from the entire SUNY community go to Dr. Samuel Stanley on becoming Stony Brook University’s president,” said SUNY Board of Trustees Chairman Carl T. Hayden. “What makes Sam Stanley the best person to lead Stony Brook University is not just that he is a prominent biomedical researcher, a talented academic administrator, and a published scholar who serves on important national committees related to his field of expertise, but that he was also presented with the Distinguished Service Teaching Award from the students of Washington University.”


Chairman Hayden also remarked on the leadership of Dr. Shirley Strum Kenny saying, “On behalf of the entire SUNY community, I want to express deep appreciation to Shirley Kenny for her 15 years of extraordinary service, leadership and commitment as president of Stony Brook University. We are truly grateful.”

“Dr. Samuel Stanley is the right person to lead Stony Brook University forward and I am excited and enthusiastic about the future,” said SUNY Trustee Michael E. Russell.  “Members of the Stony Brook University Council and the Search Committee, and their Chair Rick Nasti, have earned great praise and appreciation for conducting a thorough, rigorous national search and for the outstanding result they achieved in bringing Sam Stanley forward.”

“Dr. Stanley is absolutely an outstanding successor to Dr. Kenny,” said Chancellor-elect Nancy L. Zimpher. “I am so proud that he is the first presidential appointment that I have played a role in at SUNY and I know he will be an exceptional president in leading the talented students, world-class faculty and outstanding staff at Stony Brook University.  I look forward to working with Dr. Stanley in the months and years ahead to advance and improve public higher education on Long Island and across New York.”

Echoing these sentiments, Richard T. Nasti, Chair of the Stony Brook Council and of the Presidential Search Committee, said, “we at Stony Brook are extremely pleased and excited that Dr. Stanley will serve as the institution’s next President. He is a dynamic leader with a proven track record of success at one of the nation’s premier academic and research universities. His outstanding amalgam of skills and credentials, as well as his creative energies will serve him well. In fact, his depth of experience in attracting research funding will benefit Stony Brook tremendously as we climb in the ranks of major AAU research universities.”

Dr. Stanley – who, since 2003, has served also as Director of the National Institutes of Health-funded Midwest Regional Center for Excellence for Biodefense and Emerging Infectious Diseases – called his new appointment a “dream job.

“This brings it all together for me, the opportunity to lead a great research university…to help faculty and students achieve more, and to make a difference,” Dr. Stanley. “I know that in its relatively short life, Stony Brook has made extraordinary advances. So I’m excited, and I’m looking forward to working strategically with my new colleagues on the faculty and staff, as well as with students, alumni and others to build on this remarkable trajectory of increased excellence, while solidifying its position among the nation’s top research universities.”

As Vice Chancellor for Research at Washington University, Dr. Stanley is credited with substantially advancing the research enterprise.  In this role, he oversaw a research portfolio of $548 million, including $391 million in NIH funding. His responsibilities encompassed a broad array of activities associated with the management of these extramural research funds, including, but not limited to, the full range of matters related to undergraduate, graduate, and faculty research, and technology transfer.

The author and co-author of dozens of peer-reviewed articles and scholarly publications, Dr. Stanley is the recipient of numerous awards, including the Burrough’s Welcome Scholar Award in Molecular Parasitology and the Distinguished Service Teaching Award from the Students at Washington University.  He sits on a number of community, regional, and national science advisory boards, including the NIH National Advisory Allergy & Infectious Diseases Council; the U.S. Department of Commerce Emerging Technology and Research Advisory Committee; Research Alliance of Missouri; Saint Louis Academy of Science; and St. Louis Center of Excellence, Missouri Life Sciences Trust Fund, and is an Ambassador for the Paul G. Rogers Society for Global Health Research..

Dr. Stanley is married to Dr. Ellen Li, a world renowned gastroenterologist, an MD/PhD who is also a Professor at Washington University’s School of Medicine. Drs. Stanley and Li are the parents of four children.

Part of the State University of New York system, Stony Brook University encompasses 200 buildings on 1,600 acres. In the 50 years since its founding, the University has grown tremendously, now with nearly 24,000 students and 2,100 faculty, and is recognized as one of the nation’s important centers of learning and scholarship. It is a member of the prestigious Association of American Universities, and ranks among the top 100 national universities in America and among the top 50 public national universities in the country according to the 2008 U.S. News & World Report survey. Considered one of the “flagship” campuses in the SUNY system, Stony Brook University is a driving force of the Long Island economy, with an annual economic impact of $4.65 billion, generating nearly 60,000 jobs. Stony Brook accounts for nearly four percent of all economic activity in Nassau and Suffolk counties, and roughly 7.5 percent of total jobs in Suffolk County.

About the State University of New York

The State University of New York is the largest comprehensive university system in the United States, educating nearly 440,000 students in 7,669 degree and certificate programs on 64 campuses. To learn more about how SUNY creates opportunity, visit
www.suny.edu

Dr. Stanley will receive an annual state salary of $400,000. Dr. Stanley, in recognition and support of his ongoing research, will receive $100,000 per year from the Research Foundation of the State University of New York. The Stony Brook University Foundation will provide $150,000 annually in compensation or deferred compensation.  Dr. Stanley will be provided university-owned housing at the Stony Brook University campus and will also have use of a campus-owned vehicle during the term of his presidency.
A compensation comparison is available online
.

For details on the search process and for information about the Presidential Search Committee and to view Dr. Stanley’s C.V., go to
www.stonybrook.edu/sb/pressearch/
.  For a high-resolution jpeg photo contact
SBU_News_Office@notes.cc.sunysb.edu
–