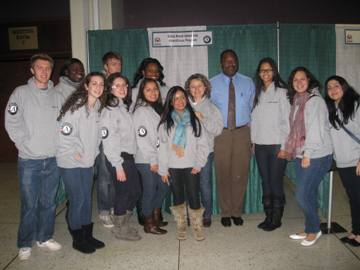 Washington, D.C., May 27, 2011 – As colleges across the country honor their graduates this commencement season, the Corporation for National and Community Service (CNCS) honored Stony Brook University as a leader among institutions of higher education for their support of volunteering, service-learning, and civic engagement. Stony Brook University was admitted to the 2010 President’s Higher Education Community Service Honor Roll with distinction for its strong institutional commitment to service and compelling campus-community partnerships that produce measurable results for the community.

The Corporation for National and Community Service, which has administered the Honor Roll since 2006, admitted a total of 641 colleges and universities for their impact on issues from literacy and neighborhood revitalization to supporting at-risk youth. Of that total, 511 were named to the Honor Roll, 114 received the recognition of Honor Roll with distinction, 11 were identified as finalists, and six received the Presidential Award.

“As members of the class of 2011 cross the stage to pick up their diplomas, more and more will be going into the world with a commitment to public service and the knowledge that they can make a difference in their communities and their own lives through service to others, thanks to the leadership of these institutions,” said Patrick A. Corvington, Chief Executive Officer of CNCS. “Congratulations to Stony Brook University and its students for their dedication to service and commitment to improving their local communities. We salute all the Honor Roll awardees for embracing their civic mission and providing opportunities for their students to tackle tough national challenges

“Stony Brook University is a community organization in every sense,” said Stony Brook University President, Samuel L. Stanley Jr., M.D., who strongly encourages community engagement among students. “It is most evident as I interact with people in the community, who talk to me about the kind and positive things our students are doing in so many different realms, whether it’s building houses, helping to teach, getting involved with important programs dealing with domestic violence. Our students are learning to communicate and develop specific skills. This is a time when our students are truly setting their path for the future.”

Communities which works with grassroots organizations to improve access to higher education, provide community health education programs and screenings, and support efforts to meet the needs of people living in underserved communities.

–  In 2009-2010 41,000 hours of service were completed by students through the AmeriCorps, VISTA, & VCS programs coordinated by the Career Center, which has relationships with 1000+ community agencies on Long Island and in NYC: an estimated 45,000 additional hours were completed by students performing service through other venues, such as service learning projects, fraternities, clubs, and organizations.

–  175 courses with a service component were offered in 18 academic departments with 2,675 students enrolled.

–  $16 million in philanthropic research grants were received in 2008-2009 to support, create, and sustain programs related to improvements within the community and surrounding areas.

The above listing is a representative sampling of the collective accomplishments of Stony Brook University students, faculty, and staff in community engagement. While community members benefit from University involvement, service also has an impact on those who perform it. Stony Brook students have reported that they have developed a deeper understanding of community problems, transferable skills, and motivation for sustained involvement as engaged citizens.

About The Corporation for National and Community Service

The Corporation for National and Community Service (CNCS) is a federal agency that engages more than five million Americans in service through its Senior Corps, AmeriCorps, and Learn and Serve America programs, and leads President Barack Obama’s national call to service initiative, United We Serve. For more information, visit NationalService.gov.

The Corporation for National and Community Service is a strong partner with the nation’s colleges and universities in supporting community service and service-learning. Last year, CNCS provided more than $215 million in support to institutions of higher education, including grants to operate service programs and the Segal AmeriCorps Education Awards for college tuition and student loan repayment. CNCS is a catalyst for service-learning programs nationwide that connect community service with academic curricula. Through these programs, in classes, and in extracurricular activities, college students serve their communities while strengthening their academic and civic skills.

CNCS oversees the Honor Roll in collaboration with the U.S. Departments of Education and Housing and Urban Development, Campus Compact, and the American Council on Education. Honorees are chosen based on a series of selection factors, including the scope and innovation of service projects, the extent to which service-learning is embedded in the curriculum, the school’s commitment to long-term campus-community partnerships, and measurable community outcomes as a result of the service.