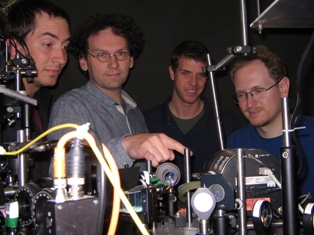 Pictured in the laboratory of Professor Dominik Schneble performing their research that demonstrates matter-wave diffraction from an artificial atomic crystal are (left to right): Jeremy Reeves, Dominik Schneble, Bryce Gadway and Daniel Pertot.

STONY BROOK, NY, MAY 22, 2012 – In a paper published in the May 20, 2012 edition of the journal Nature Physics, a research group from the Department of Physics and Astronomy at Stony Brook University reports the development and demonstration of a novel probe for atomic quantum matter. The paper, “Probing an Ultracold-Atom Crystal with Matter Waves,” describes a proof-of-principle experiment on the diffraction of atomic de Broglie waves from a strongly correlated gas of atoms held in an optical lattice.

“Our work extends matter-wave diffraction, a technique that has already proven useful in various scientific disciplines, to the realm of ultracold quantum matter. What we demonstrated is similar to the diffraction of neutrons for the characterization of solid-state systems, but at energies that are a billion times lower,” said Dominik Schneble, an associate professor in the Department of Physics and Astronomy at Stony Brook, who led PhD students Bryce Gadway, Daniel Pertot and Jeremy Reeves in conducting the research.

In the experiment, an artificial atomic crystal is prepared by loading bosonic atoms, cooled down to a few billionths of a degree above absolute zero, into a miniature egg-crate-like potential landscape that is generated by several interfering laser beams. The behavior of atoms in this optical lattice closely mimics that of electrons in a conventional solid, but at a lattice period that is three orders of a magnitude larger, providing the experimenters with exquisite control over all relevant parameters in a defect-free system.  By increasing the depth of the optical potential, it is possible to reduce quantum-mechanical tunneling and eventually drive the interacting atoms into a localized crystalline state, a Mott insulator.

Studies of such and other strongly-correlated phases, which are now conducted at a number of laboratories around the world, have recently propelled ultracold atomic physics into the focus of modern condensed-matter research, and the development of methods to characterize such phases is a central concern. The Stony Brook researchers recognized that Bragg diffraction of atoms may provide a simple yet powerful diagnostic tool that also allows for non-destructive probing.

Starting with a Bose-Einstein condensate, the researchers prepared a coherent atomic matter wave (akin to a coherent laser pulse), which they then directed at the atomic crystal. The wave-particle nature of atoms allowed them to control the wavelength of the incident atoms through their relative velocity.  “Because the de-Broglie wavelength can easily be tuned, our technique precludes limitations on spatial resolution,” said Bryce Gadway, first author of the paper, who is slated to join JILA (Boulder) as a National Research Council postdoctoral fellow this summer.

By scanning the atom’s wavelength, the researchers observed distinct Bragg resonances in the scattered signal, which revealed the crystalline lattice structure. From the signal, they were also able to characterize the localization of atoms on individual lattice sites, which is dominated by zero-point motion.  Furthermore, upon reducing the atom’s localization (“melting” of the crystal), the Stony Brook team observed inelastic scattering in the band structure.

As a first application, the researchers prepared and detected an atomic spin-mixture with forced-antiferromagnetic order. “In the future, our technique may be extended to the characterization of various novel states of ultracold matter, such as charge- and spin-density waves, and magnetically ordered ground states of quantum gas mixtures,” said co-author Daniel Pertot, now a postdoctoral research associate at the University of Cambridge, UK.

Independent of any such potential applications, adds Schneble, “Our experiment provides a nice example of wave-particle duality, where ultracold atoms serve both as localized particles and as coherent waves diffracting from them.” 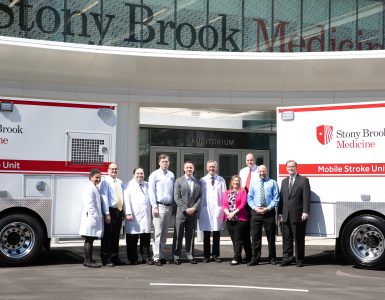