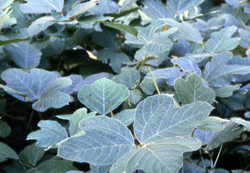 STONY BROOK, NY, May 17, 2010 – Kudzu, “the vine that ate the South,” is not just swallowing landscapes and altering ecosystems in the southeastern U.S., it is also increasing ozone pollution according to a new report published in the May 17, 2010 on line edition of the Proceedings of the National Academy of Sciences (PNAS). Planted in the early 20th century to help control erosion, this Asian native is a fast growing legume that can fix atmospheric nitrogen at a high rate, potentially altering the nitrogen cycle where it invades.

While a graduate student at Stony Brook University, Jonathan Hickman (now a postdoctoral fellow at the Earth Institute at Columbia University) and colleagues investigated the effect of kudzu on ecosystems in Georgia by comparing nitrogen cycling and nitrogen oxide fluxes from soils invaded by kudzu to unaffected soils.

“Kudzu had the potential to add a lot of nitrogen to soils, so we expected to see some pretty big impacts on the soils of invaded ecosystems in the United States.  It turns out that the changes you can’t see in a kudzu invasion are just as dramatic as the ones you can.” Hickman said.  Measurements in Georgia showed that some rates of nitrogen cycling were up to ten times faster in soils where kudzu had invaded.

In addition to profound changes in rates of several components of nitrogen cycle, the researchers found that kudzu caused a doubling of emissions of nitric oxide from soils. Along with volatile organic compounds (VOC’s), nitric oxide is the key precursor to ozone pollution in the lower atmosphere.

“While documenting these impacts on soil chemistry and nitric oxide emissions is definitely important, we really wanted to see whether an invasive species could affect the atmosphere in a meaningful way,” Hickman said.

To do that, Hickman and the University of Virginia’s Manuel Lerdau worked with Loretta Mickley and Shiliang Wu, atmospheric modelers at Harvard University, who employed a chemical transport model to predict effects of this increased nitric oxide on air quality in the southeastern United States.  In one scenario, the number of high ozone days in parts of the region increasing by seven after an extensive kudzu invasion—an increase of over 35% compared to a scenario without kudzu. While the scenario is extreme, the work establishes a measurable link between an invasive plant and ozone formation.

“Air pollution is a risk that hasn’t been considered much in the conversation about invasive species, but it’s something we may have to pay more attention to,” Hickman said.

Though it wasn’t examined in the study, kudzu also emits isoprene, a VOC produced in large quantities by certain plant species, which is involved in reactions with NOx to form ozone.

“In the case of kudzu, you have a plant that is generating NOx from the soil and emitting VOC’s from its leaves—it’s like a living tailpipe. Maybe they’ll start calling kudzu ‘the vine that choked the South.’”