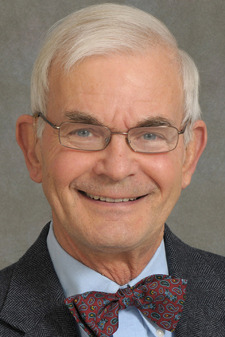 STONY BROOK, NY, May 4, 2012 – Eckard Wimmer, PhD, Distinguished University Professor, Department of Molecular Genetics & Microbiology, Stony Brook University School of Medicine, and internationally recognized for his poliovirus research, has been named to the National Academy of Sciences (NAS). Dr. Wimmer was elected an NAS member in recognition of his distinguished and continuing achievements in original research. The NAS announced the election of 84 new members on May 1.

The NAS, created by an act of Congress in 1863, is a private, non-profit society of distinguished scholars engaged in scientific and engineering research, dedicated to the furtherance of science and technology and to their use for the public good. The NAS advises the U.S. government on the scientific and technological issues that affect policy decisions.

“Stony Brook University is fortunate, and indeed proud to have such an esteemed and world renowned scientist-educator as Eckard Wimmer on our faculty,” said Stony Brook University President Samuel L. Stanley Jr., M.D. “Since coming to Stony Brook nearly 40 years ago, Eckard’s work has been internationally acknowledged for its significance. Election to the NAS can be viewed as a pinnacle in terms of recognition for his groundbreaking achievements and we applaud him.”

A faculty member at Stony Brook since 1974 and Chair of the Department of Molecular Genetics and Microbiology between 1984 and 1999, Dr. Wimmer has worked for decades predominantly on poliovirus. He is internationally known for this work, which includes the elucidation of the chemical structure of the poliovirus genome in the late 1970s and subsequent discoveries based on the mechanisms of poliovirus pathogenesis and the human receptor for poliovirus. These landmark discoveries have served to stimulate international research in virology and cell biology.

More specifically, Dr. Wimmer published the first de novo, cell-free synthesis of a virus (poliovirus), which greatly stimulated molecular studies of viral replication. This was capped in 2002 with the first chemical-biochemical test-tube synthesis of any organism (again poliovirus) in the absence of a natural template. This strategy has led to studies of the structure and function of a virus to an extent not possible before.

“I am honored to be named to the National Academy of Sciences,” says Dr. Wimmer. “I look forward to providing insight in an advisory capacity on important issues and findings in the areas of microbiology and molecular genetics.”

“Dr. Wimmer has been both pioneer and ongoing guiding light in our understanding of how polio and other viruses cause human disease,” says Kenneth Kaushansky, M.D, Senior Vice President for the Health Sciences and Dean, School of Medicine. “His insights have revolutionized our approaches to creating novel ways to address a myriad of diseases. Thus, it is entirely fitting that his accomplishments be recognized in his election to the National Academy of Sciences.”

“Dr. Wimmer’s accomplishments, especially in the area of poliovirus genome research, is nothing short of extraordinary,” says Jorge L. Benach, Ph.D., Distinguished University Professor, Chair of the Department of Molecular Genetics & Microbiology, and Director, Center for Infectious Diseases, Stony Brook University. “The department has benefited from his expertise and experience as a researcher, educator, and mentor to junior faculty.”

The 2012 NAS membership election brings total NAS membership to 2,152, with an additional 430 foreign associates, of whom approximately 200 have received Nobel prizes.

Dr. Wimmer is also a Fellow of the American Association for the Advancement of Science. His other honors include a Lifetime Achievement Award from the Research Foundation of the State University of New York (2008); Fellow, Deutsche Akademie der Wissenschaften Leopoldina von 1652 (1998); Fellow, American Academy for Microbiology (1994), and two Merit Awards from the National Institutes of Health (1988, 1998). In 2010, Dr. Wimmer received the Beijerinck Prize in Virology from The Royal Netherlands Academy of Arts and Sciences.