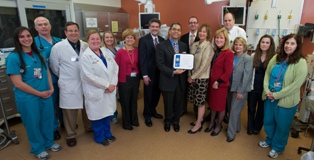 STONY BROOK, NY
, May 4, 2011 – Stony Brook University Hospital (SBUH) was recognized by the National Association of Public Hospitals and Health Systems (NAPH) as a recipient of the 2011
NAPH Safety Net Patient Safety Award
. The award is given to organizations for implementing evidence-based patient safety initiatives and specifically to Stony Brook for its efforts in the reduction of severe sepsis mortality. From 2006 to 2010, the Hospital demonstrated a 50.8 percent reduction in the incidence of severe sepsis mortality. The Medical Center will be honored at the 2011 NAPH Annual Conference in June.

SBUH was also selected to receive an
Outstanding Leadership Award
for achievements in eliminating central line-associated bloodstream infections (CLABSI). Sponsored by the U.S. Department of Health and Human Services and the Critical Care Societies Collaborative, this national award program recognizes teams of critical care professionals and healthcare institutions that achieve excellence and notable, sustained improvements in preventing healthcare‐associated infections, specifically in the critical care setting. SBUH was awarded for dramatically decreasing its hospital-wide CLABSI rates by 59 percent from 2008 to 2010, resulting in a decrease of 1,144 patient days and an estimated cost savings of $7.6 million.