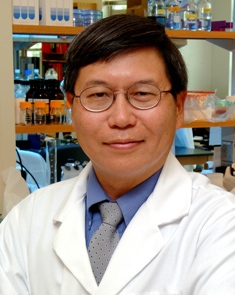 Dr. Vincent Yang Oversees the Largest Department within the School of Medicine

“Dr. Yang is considered among his peers as the consummate physician-scientist,” said Dr. Kaushansky. “Vince is an ideal Chair for Stony Brook, with tremendous qualifications and passion to lead and enhance the excellence that already exists within the Department of Medicine. With his strong academic and clinical background, specifically in the origins of GI malignancy, Dr. Yang’s scholarly and clinical work bridges two major focus areas within our strategic plans– GI disorders and cancer.”

“Vince has been a pioneer in the cloning and characterization of kruppel-like factors (KLF) in the gut, and as an outstanding physician-scientist, not only has investigated these molecules for the understanding of their role in cancer, but utilized his laboratory as an outstanding training ground for young and upcoming scientists” said Dr. John Carethers, Chair of Medicine at the University of Michigan, and an outstanding physician-scientist studying the origins of GI cancers.  “Vince is a wonderful clinician, an outstanding voice for GI and GI oncology, and has played several roles in the leadership of the American Gastroenterological Association (AGA), including Chair of the GI Oncology Section, Associate Editor of Gastroenterology (the highest impact subspecialty journal), and most recently as a Councilor on the AGA Governing Board,” adds Dr. Carethers.

A native of Taiwan, Dr. Yang received his Bachelor’s Degree in Agricultural Chemistry from the National Taiwan University in Taipei. He emigrated to the U.S. in 1976 for graduate studies, receiving his Ph.D. Degree in Biochemical Sciences from Princeton University and his Medical Degree from the University of Medicine and Dentistry of New Jersey-Robert Wood Johnson Medical School. Dr. Yang then served as an Intern and Resident in Internal Medicine at Johns Hopkins University School of Medicine, where he also completed a Fellowship in Gastroenterology, after which he joined the Hopkins faculty, rising to become Associate Professor of Medicine and Biological Chemistry. He then moved, ten years ago, to Emory, where he rose to Professor and was appointed as head of the Division of Digestive Diseases.

“I am truly honored to be selected and begin as the new Chair of the Department of Medicine at Stony Brook University,” said Dr. Yang. “Stony Brook has a rich history of academic excellence and its school of medicine is positioned to become a national leader for healthcare delivery and research innovation. I will be working with the school administration to further develop the department into a world-class department of medicine in all of its missions including research, education and patient care.”

Dr. Yang’s research interests focus on understanding the molecular mechanisms that control proliferation and differentiation of intestinal epithelial cells and how these processes are perturbed in gastrointestinal malignancies. His clinical interest is focused on hereditary colon cancer syndromes and he works closely with national organizations including the Centers for Disease Control and Prevention (CDC) to establish genetic epidemiology of such diseases.
As a leader and administrator at Emory, Dr. Yang significantly enhanced the academic reputation of the Division of Digestive Disease. Under his Emory tenure, he recruited 30 new faculty members and an equal number of research staff to the division, including six physician-scientists. Grant funding to the division included over 20 NIH and VA grants and 10 ARRA (American Recovery and Reinvestment Act) awards.

While at Emory, he was the Principal Investigator of an NIH-funded Digestive Diseases Research Development Center grant, which provided core services to a group of 35 independently funded Emory investigators in digestive disease research across seven different departments. Under Dr. Yang’s management, the Gastroenterology service at Emory Healthcare enjoyed a robust and stable clinical practice. He also oversaw a vibrant GI fellowship training program and served as its program director for a number of years during his tenure.

As an educator, Dr. Yang has routinely taught medical and graduate students, as well as medicine residents and gastrointestinal fellows in GI physiology, cancer biology and genetics. He has mentored numerous GI fellows, two dozen research postdoctoral fellows, and about a dozen each of graduate students and residents. Many of his former mentees are now established academicians in their own rights in institutions such as the Johns Hopkins University, University of Michigan, and University of North Carolina at Chapel Hill. At Emory he received several awards for his teaching contributions, including the Silver Pear Mentoring Award from his Department and the “One-in-One Hundred” Outstanding Postdoctoral Fellow Mentoring Award from the Emory School of Medicine.
On a national scale, Dr. Yang has served on a large number of NIH review committees, including serving as Chair of the Gastrointestinal Cellular and Molecular Biology (GCMB) Study Section and for many years on the VA Medical Research Service Merit Review Subcommittee for Gastroenterology and for Oncology.

Dr. Yang has contributed to more than 100 peer-reviewed scientific publications and to more than 50 other books, reviews and editorials. He serves on many editorial boards and is currently the Associate Editor of the journal Clinical and Translational Science, Senior Editor of American Journal of Cancer Research, and Senior Associate Editor of Gastroenterology. He has continuously been involved in various committee work of the American Gastroenterological Association and was recently elected to its governing board as the Basic Science Councillor.

Dr. Yang has been elected to the two most prestigious honor societies devoted to clinical investigation in the U.S., the American Society for Clinical Investigation and the Association of American Physicians. A recipient of numerous awards, he was one of the first to receive the Georgia Cancer Coalition Distinguished Cancer Clinician Scientist Award in 2001. Previously, he received a Sandoz Clinician Scientist Award from The Johns Hopkins University School of Medicine, the American Gastroenterology Association/Sandoz Research Scholar Award and Robert Wood Johnson Medical School Distinguished Alumni Award.