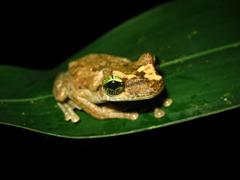 A treefrog (Osteocephalus heyeri) from the Amazonian rainforest. Photo by Dan Moen.

STONY BROOK, N.Y., May 3, 2011—For more than two hundred years, the question of why there are more species in the tropics has been a biological enigma.  A particularly perplexing aspect is why so many species live together in a small area in the tropics, especially at some sites in the rainforests of the Amazon Basin in South America.

New research on the evolution and ecology of treefrogs, to be published online this month in the journal “Ecology Letters,” sheds new light on the puzzle. The patterns found in treefrogs may also help to explain the high species richness of other groups of organisms—such as trees, birds and insects—in the Amazon rainforests.

The article, entitled “Phylogenetic Origins of Local-Scale Diversity Patterns and the Causes of Amazonian Megadiversity,” will be published online at http://www.wiley.com/bw/journal.asp?ref=1461-023x.

“Treefrogs are a particularly important group to study for understanding amphibian diversity, because they can make up nearly half of all amphibian species in some rainforest sites,” says lead author John J. Wiens, an Associate Professor in the Department of Ecology and Evolution at Stony Brook University.  “Treefrogs also offer a striking example of the high local-scale biodiversity in the Amazon.  At some sites in the Amazon rainforest, there are more treefrog species in a small area than there are across all of North America or Europe.”

The researchers compiled data on the number of treefrog species at 123 sites around the world and analyzed the data with a new evolutionary tree (based on DNA sequence data) for 360 treefrog species.  They discovered that the richness of treefrog species in the Amazon rainforest sites is not explained by wet, tropical climatic conditions alone.

“In fact, we found that many tropical rainforest sites that are outside the Amazon Basin have no more species than do some sites in temperate North America,” explains Dr. Wiens.

Instead, the researchers discovered that the high biodiversity of Amazonian sites is related to different groups of treefrogs occurring together in the Amazon Basin for more than 60 million years—since before most dinosaurs became extinct.  In contrast, those sites in tropical rainforests that have relatively few treefrog species are in areas that were colonized by treefrogs much more recently.

These results also have important implications for humans.  “The results suggest that the incredible biodiversity of amphibians in some sites in the Amazon Basin took more than 50 million years to develop,” says Dr. Wiens.  “If the Amazon rainforests are destroyed and the amphibian species are driven to extinction by human activities in the next few decades, it may take tens of millions of years for this incredible level of biodiversity to ever return.”


About Stony Brook University
Part of the State University of New York system, Stony Brook University encompasses 200 buildings on 1,450 acres. Since welcoming its first incoming class in 1957, the University has grown tremendously, now with nearly 25,000 students and 2,200 faculty. Its membership in the prestigious Association of American Universities (AAU) places Stony Brook among the top 63 research institutions in North America. U.S. News & World Report ranks Stony Brook among the top 50 public universities in the nation, and Stony Brook ranked 78th in the Times Higher Education World University Rankings. One of four University Center campuses in the SUNY system, Stony Brook University co-manages Brookhaven National Laboratory, putting it in an elite group of universities that run federal research and development laboratories. As the largest single-site employer on Long Island, Stony Brook is a driving force of the regional economy, with an annual economic impact of $4.65 billion, generating nearly 60,000 jobs, and accounts for nearly 4% of all economic activity in Nassau and Suffolk counties, and roughly 7.5 percent of total jobs in Suffolk County.