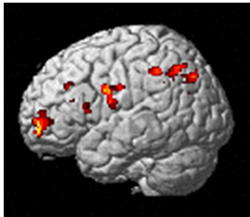 Reported in Social Cognitive and Affective Neuroscience, the Study Links Traits to Thinking

STONY BROOK, N.Y., May 3, 2010 – Building on previous brain imaging research that revealed cultural influences play a role in neural activation during perception, Arthur Aron, Ph.D., Professor of Psychology at Stony Brook University, and colleagues, completed a study that suggests individuals who are highly sensitive have cognitive responses that appear to not be influenced by culture at all. Reported in advance online in
Social Cognitive and Affective Neuroscience
, and scheduled for print in the June issue, the study could serve as a foundation for the direction of study in the emerging field of cultural neuroscience.


“Our data suggest that some categories of individuals, based on their natural traits, are less influenced by their cultural context than others,” says Dr. Aron. He adds that the study is the first to analyze how a basic temperament/personality trait, called sensory processing sensitivity (SPS), interacts with culture and neural responses.

SPS is characterized by sensitivity to both internal and external stimuli, including social and emotional cues. Scientists estimate that something like high sensitivity is found in approximately 20 percent of more than 100 species, from fruit flies and fish to canines and primates and has evolved as a particular survival strategy that differs from the majority. The standard measure in humans is the Highly Sensitive Person (HSP) Scale, previously developed by Dr. Aron and his wife, Dr. Elaine Aron. An example of one item on the HSP scale is “do you seem to be aware of subtleties in your environment.”

Dr. Aron says those who score high on the scale report being easily overwhelmed when too much is happening, startle easily, are conscientious, enjoy the arts more, and have a lower pain threshold. They are more emotionally reactive and more affected by the environment compared to those who score low on the scale.

The researchers measured SPS in 10 East Asian individuals temporarily in the U.S. and and 10 Americans of Western-European ancestry. In a previous study, these same 20 individuals had undergone brain functional magnetic resonance imaging (fMRI) while performing a cognitive task of comparing the length of lines inside boxes. The participants’ responses to the task tested their perception of the independence versus interdependence of objects as the fMRI measured the neural basis of their responses.

The major finding of that study was that the frontal-parietal brain region (see Figure) known to be engaged during attention-demanding tasks was more activated for East Asians when making judgments ignoring context, not their specialty, but was more activated for Americans when making judgments when they had to take context into account, not their specialty. This discovery, says Dr. Aron, illustrated that each group engaged this attention system more strongly during a task more difficult for them because it is not generally supported by their cultural context. That is, even when doing a simple, abstract cognitive task, culture influences perception.

In the SPS study, Dr. Aron and colleagues took the brain activations in these two groups from the previous study and considered them in light of the SPS scores of the same individuals. They found SPS as a trait yielded a very clear pattern of results:

“The influence of culture on effortful perception was especially strong for those who scored low on the scale measuring sensitivity, but for those who scored high on the measure (highly sensitive individuals), there was no cultural difference at all,” says Dr. Aron. Regarding the fMRI, Dr Aron adds: “Culture did not influence the degree of activation of highly sensitive individuals’ brains when doing the two kinds of perceptual tasks used in the previous study. Also, how much they identified with their culture had no effect. It was as if, for them, culture was not an influence on their perception.”

Dr. Aron emphasized that the new research suggests that characteristics possessed by high SPS individuals, such as being emotionally reactive or conscientious, actually flow out of or are side effects of the overriding feature of processing information more thoroughly than low SPS individuals.

While the results showed a clear, statistically significant connection between SPS, cognitive processing, and culturally-based thinking, Dr. Aron indicates that the small numbers of participants does not rule out the possibility that these results could be sample specific, so conclusions must be taken as preliminary and only as suggestive. Replications of the study and larger sample sizes, he adds, would help to further the research.

The study was funded in part by the National Institutes of Health.