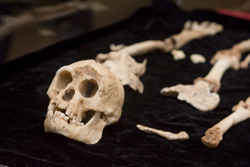 STONY BROOK, N.Y., April 30, 2009 – Prototype cast of a ‘Hobbit’ skeleton was publicly displayed for the first time ever at Stony Brook University’s 7th Annual Human Evolution Symposium on Tuesday, April 21, courtesy of the National Research and Development Centre for Archaeology in Jakarta, Indonesia.

Homo floresiensis has emerged as one of the most fascinating and perplexing twists to the story of human evolution in recent history. Dated to only 17,000 years ago, these “hobbits” possessed an unexpected number of primitive features more reminiscent of our earlier ancestors, such as Homo erectus and Australopithecus, than modern humans.

“Prototypes of the entire skeleton of the specimen have never been displayed anywhere, inside or outside of Indonesia,” said William Jungers, Distinguished Teaching Professor and Chair of the Department of Anatomical Sciences at Stony Brook. “This is a real first.”

Typically, casts are made by first creating a mold of the fossil. The mold is then filled with a liquid, such as resin, plastic, or plaster. When this liquid hardens, the mold is split open and the finished cast is removed. However, most of the Homo floresiensis fossils are too soft and delicate to withstand the casting process. This skeleton was created at Stony Brook University using biomedical digital technology known as CT scanning. The CT scans of the skeleton procured in Indonesia were processed to create a 3-D map of the hobbit’s skeleton, which was then converted into nylon “casts” using a prototype printer. “Considering we usually fabricate engineering components, it was quite eerie to pull bones out of the 3-D printer/prototyper,” said Dr. Jim Quinn, Director of Laboratories, Department of Materials Science and Engineering at Stony Brook.

As the debate rages on about whether Homo floresiensis – the so called “Hobbit” – fossils discovered on the Indonesian island of Flores in 2003 represent a separate human species, the symposium brought together the researchers currently in the process of describing and analyzing the remains. Convened by Richard Leakey, the world renowned paleoanthropologist who is Professor of Anthropology at Stony Brook, the public symposium, “Hobbits in the Haystack: Homo floresiensis and Human Evolution,” was hosted by the Turkana Basin Institute at Stony Brook.

“At the symposium, we did our best to separate fact from myth on the controversial issues surrounding this prehistoric hominin, which has gained international celebrity status,” said Jungers.

“In the next step of this study, we’re hoping to excavate on Indonesian deposits in Flores that go back almost a million years ago. We hope to find the ancestor of the hobbits. There’s been a lot of misinformation in the popular press about these creatures. We want to set the record straight. We’re going to continue looking at what the fossils tell us—what these guys ate, how they walked, and what allowed them to survive so long in isolation. But one of the special things about our physical anthropology group is that we don’t just study fossils. We also study the biomechanics of the skeletons of living primates, like humans and apes. The living are the key to the past.”