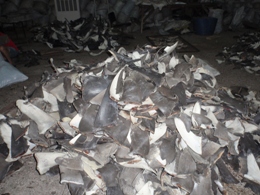 Studies show that coastal sharks have ‘DNA zip codes’ that can reveal where they were born; underscores potential of DNA testing to monitor fin trade

This is an assortment of dried shark fins in the process of being shipped from Fiji to Hong Kong. Tens of millions of fins are exported from nations around the globe to Asia, where they are used to make shark fin soup. Scientists have found that “zip codes” in the fin’s DNA can reveal where the fin came from and thus contribute to improved shark conservation.

STONY BROOK, NY, April 27, 2011 – An international team of scientists, led by the Institute for Ocean Conservation Science at Stony Brook University,  has used DNA to determine that groups of dusky sharks (Carcharhinus obscurus) and copper sharks (Carcharhinus brachyurus) living in different coastal regions across the globe are separate populations of each species. Both are large apex predators that are heavily exploited for the shark fin trade, which claims tens of millions of animals every year to produce the Asian delicacy, shark fin soup. Many of these species are declining as a result of this fishing pressure for their fins.

The dusky shark is classified as “Endangered” in the Western Atlantic by the International Union for Conservation of Nature as its population is below 20 percent of what it was two decades ago. These new studies show that the genetic differences among populations of these sharks are large enough for scientists to be able to track the actual origin of the fins on sale in Asian markets, enabling better regional monitoring and management of these threatened predators.

These research findings appear in two scientific articles. “Global phylogeography of the dusky shark, Carcharhinus obscurus: implications for fisheries management and monitoring the shark fin trade,” has been published online in the journal Endangered Species Research. “Phylogeography of the copper shark (Carcharhinus brachyurus) in the southern hemisphere: implications for the conservation of a coastal apex predator” will soon be published in the journal Marine and Freshwater Research. The primary objective of these studies was to identify any genetic differences among regional groups of dusky and copper sharks and establish how many distinct populations there are. The second objective was to determine if these population differences were great enough to allow scientists to reconstruct their contributions to fin trade in the future. Like many large sharks, these species have a wide distribution around the globe but are tied to coastal areas for reproduction.

“By analyzing part of the genome that is inherited solely through the mother, we were able to detect differences between sharks living along different

continents – in effect, their DNA zip codes,” said Dr. Demian Chapman, leader of the research team and assistant director of science of the Institute for Ocean Conservation Science. “This research shows that adult females faithfully give birth along the continental region where they were born. If fished too much, the population will collapse, and it is extremely unlikely that it will be replenished from immigration of sharks from another region.”

This is precisely what has happened along the U.S. Eastern Seaboard, where the once common dusky shark is now rare and a species of concern for listing under the Endangered Species Act. At one time, these animals were common in ocean waters off the United States; however, a recent stock assessment of the sharks along the U.S. East Coast and in the Gulf of Mexico showed an 80 percent decline even though they have been protected since 2000. The recovery of the species is extremely slow because the average age of maturity is 20 years, its reproductive cycle only occurs every three years – including a two-year pregnancy – and its litter size is relatively small (three to 14 offspring).

“Here in the United States, it took only a few decades to nearly wipe out our dusky sharks, and it will probably take a few centuries for their stocks to be replenished,” said Martin Benavides, lead author of both studies and research assistant at the Institute for Ocean Conservation Science. “Our results dash any hopes that dusky sharks from other areas of the world will replenish the depleted U.S. stock. The sight of a dusky shark swimming off our shores will be a rare experience for generations to come.”

“We know very little about the shark fin trade, but by using DNA-zip coding we can identify source populations that are contributing most to the trade, and prioritize them for management,” added Dr. Chapman. “We, therefore, really need to establish sampling programs of fins on their way to Asia or in the markets to regulate the global trade before many more populations suffer the fate of the dusky shark in the United States.”

For years, it was difficult to determine the origin of these fins and whether they were from threatened species. A study by Dr. Chapman, which was published in 2009, Chapman(1) used DNA testing to trace scalloped hammerhead shark fins from the Hong Kong market all the way back to the sharks’ geographic origin and found many came from collapsed Western Atlantic populations. These new research results demonstrate that this type of testing also can be used to trace the origins of the fins of dusky and copper sharks.

“As apex predators at the top of marine food webs, it is essential for ocean health that we take steps, such as monitoring and regulating the fin trade, to protect these large sharks,” said Dr. Ellen K. Pikitch, executive director of the Institute for Ocean Conservation Science.

Both research projects were conducted by a collaborative international team of scientists from the United States, Australia, South America, Asia, New Zealand and southern Africa. The scientists collectively analyzed part of the mitochondrial DNA in nearly 400 sharks sampled from all over the globe.

This research was funded by The Pew Charitable Trusts through a grant to the Institute for Ocean Conservation Science at Stony Brook University. Sequence data were collected in the Field Museum’s Pritzker Laboratory for Molecular Systematics and Evolution, operated with support from the Pritzker Foundation. Additional sequence data were collected at the Guy Harvey Research Institute with operational funds and a grant from the Save Our Seas Foundation. Funding was also provided by the Turner Fellowship Program and the Tinker Foundation.

For more information on “Phylogeography of the copper shark (Carcharhinus brachyurus) in the southern hemisphere: implications for the conservation of a coastal apex predator,” visit: http://www.publish.csiro.au/view/journals/dsp_journals_pip_abstract.cfm?nid=127&ver=3&pip=MF10236

The Institute for Ocean Conservation Science at Stony Brook University is dedicated to advancing ocean conservation through science. The Institute transforms real-world policy while pursuing serious science, both of which are essential for ocean health.  For more information, go to www.oceanconservationscience.org.