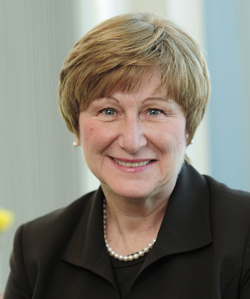 Dr. Lee Xippolitos appointed in dual role as Dean of the School of Nursing


As Dean, Xippolitos will serve as chief executive of the School of Nursing, defining its standard in excellence. Working closely with the faculty and department chairs, she will lead the establishment and implementation of academic, research and clinical practice programs. She is also responsible for implementing NYS Department of Education, University and School policies, overseeing all support services for the School, and addressing needs of students, faculty and staff.

As a young girl, Xippolitos dreamed of becoming a nurse; it was a career choice she pursued right out of high school. She received her BS degree and MS degree from Stony Brook University School of Nursing. She is certified as a Clinical Nurse Specialist as well as a Nurse Practitioner in psychiatric nursing. She completed her PhD at Adelphi University in Garden City, New York.  She holds a certificate as an addictions nurse by the National Addictions Nursing Certificate Board and is a certified Nurse Administrator with the American Nurses Credentialing Center.

“This is the pinnacle of my career in nursing,” said Xippolitos. “For me, to be appointed both Dean of the School of Nursing and Chief Nursing Officer in an academic medical center is turning a dream into reality.”

“I could not be more pleased that Lee accepted this offer to become Dean of the School of Nursing while continuing in her role as Chief Nursing Officer,” said President Stanley. “She is now in a position to effectively marry the School of Nursing and the Medical Center more strategically, and prepare students for the real world.”

“I’m just thrilled,” she said. “I love this University and am very happy to be part of it.”

“We are delighted that Dr. Xippolitos has accepted the position of Dean at the School of Nursing,” said Craig Lehmann, PhD, Interim Executive Dean of the Health Sciences Center at Stony Brook University. “Her extensive experience as a practicing nurse ‘in the field’ and as part of the upper management team as chief nursing officer at SBUMC brings a unique perspective to the position. This exceptional background, coupled with her energy and enthusiasm, will impart a refreshing point of view to her deanship that will serve faculty, staff, students, as well as the community at large, extremely well. I look forward to our continued collaboration to produce some of the best nurses in New York State.”

“There is no doubt about Lee’s leadership skills and commitment to nursing professional development, mentorship and education,” said Steven L. Strongwater, M.D., CEO, Stony Brook University Hospital. “She has made education a key part of development plans inside Stony Brook University Hospital and now has a chance to influence aspiring nurses as well.  I can not think of a more committed and qualified individual to assume this leadership role at SBU. We are very proud of Lee.”

As Chief Nursing Officer at Stony Brook, Xippolitos led or co-led several initiatives to outstanding results. She was responsible for managing to reduce the nursing Vacancy Rate from 22% to 2%;  she served in a joint leadership role on developing the house-wide Electronic Medical Record; she lead the team when the hospital was recognized as Best Practice Hospital for Creating a Healthy Workplace – 2007 UHC Collaborative; she was elected 2008-2010 Chair to University Health System Consortium CNO Council; was recipient of 2008 Sigma Theta Tau International, Kappa Gamma Chapter, Nursing Leadership Award; and, in 2007, was honored as 2007 Farmingdale College Alumni of the Year. She is founding member of Sigma Theta Tau International Kappa Gamma Chapter where she has held numerous positions and currently serves as Chairperson of the Finance Committee.

Xippolitos lives in St. James with her husband, George. They have four adult children Kristin, Kelly, Kristofer and Peter and four granddaughters, Emma, Kate, Sarah and Courtney and a grandson, Matthew.

The Stony Brook University School of Nursing is one of four professional schools in the University Health Sciences Center and is accredited by the Commission on Collegiate Nursing Education (CCNE). Student enrollment consists of 38% undergraduate, 58% graduate, and 4% doctoral. The school offers full- and part-time educational opportunities in preparation for professional nursing practice, including three degree programs: Bachelor of Science, Master of Science, and Doctor of Nursing Practice. Nurses with baccalaureate degrees may continue their education by preparing for advanced practice as Nurse Practitioners, Clinical Nurse Specialists, or Nurse Midwives (Accredited by the American College of Nurse-Midwives, Division of Accreditation). Post Masters Certificate and Masters Completion options are available. Clinical experiences are currently offered in approximately three hundred sites throughout the United States, Canada, and abroad, including those offered at Stony Brook University Medical Center. – See more at: http://commcgi.cc.sunysb.edu/cgi-bin/am2/admin.cgi#sthash.QccBEH26.dpuf