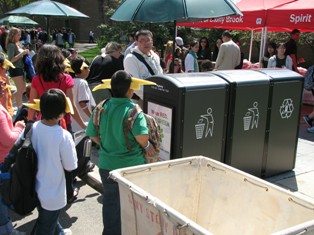 STONY BROOK, NY, April 20, 2012 – Stony Brook University has been selected by The Princeton Review and the U.S. Green Building Council (USGBC) as one of the nation’s most environmentally friendly or “green” colleges for the third year in a row in “The Princeton Review’s Guide to 322 Green Colleges: 2012 Edition.”Additionally, Stony Brook put forth a strong showing in the 12th annual RecycleManiaTournament, recycling more than three million pounds of material in the eight-week competition against more than 600 colleges and universities in the nation. As part of its commitment to sustainability, Stony Brook is also celebrating the Earthstock Festival on Friday, April 20 in honor of Earth Day on April 22.

In the RecycleMania Tournament, Stony Brook recycled 144,000 pounds of bottles and cans, 187,000 pounds of corrugated cardboard, 311,000 pounds of paper, 2.3 million pounds of trash, 30,000 pounds of food service organics and 35,000 pounds of e-waste. The cumulative greenhouse gas reductions equal 360 metric tons of carbon dioxide, which is equivalent to the removal of 191 cars off the road or the energy consumption of 95 households.

Stony Brook placed 17th out of 296 entries in the competition’s Gorilla category, which ranks universities on the total weight of bottles, cans, cardboard and recycled paper collected. This category’s ranking was the highest of any college or university in New York State. Stony Brook also placed eighth out of 67 entries in the E-Waste category for the total weight of recycled electronic waste.

The Guide to 322 Green Colleges credits Stony Brook for having a long history of green awareness. “The Environmental Defense Fund, an organization dedicated to introducing sustainability science to business leaders, was founded by a Stony Brook professor in 1967,” stated the profile. “Since then, Stony Brook University has signed the American College and University Presidents’ Climate Commitment, created an environmental stewardship department, and established a five-year sustainability plan.”

“The State University of New York takes great pride in the increasing sustainability efforts on our campuses, and contributing to an energy-smart New York is one of six primary focuses of our strategic plan, The Power of SUNY,” said SUNY Chancellor Nancy L. Zimpher. “We could not be more pleased that Stony Brook University and nine other SUNY campuses have been recognized on the Princeton Review’s List of Green Colleges. Congratulations on this much-deserved national distinction.”

Sustainability goes beyond traditional recycling at Stony Brook University with initiatives like the bike share program where students can rent a bike for a nominal fee and Campus Dining’s use of all biodegradable packaging and utensils, and an in-vessel composter, which processes food waste and biodegradable packaging into compost for use in maintaining campus grounds. SBU Transit buses operate on a biodiesel blend which keeps emissions low effectively reducing Stony Brook’s carbon footprint.

The Green Guide’s profile also highlights Stony Brook’s efforts to decrease utility costs, “The University participates in a program offered by the New York State Energy Research and Development Authority (NYSERDA) to implement energy conservation projects and to fund these projects through the savings on utility bills, an effort that will save the university more than $300,000 per month.”

“College-bound students are increasingly interested in sustainability issues,” said Robert Franek, Senior Vice President and Publisher of The Princeton Review. “Among 7,445 college applicants who participated in our 2012 ‘College Hopes & Worries Survey,’ nearly 7 out of 10 told us that having information about a school’s commitment to the environment would influence their decision to apply to or attend the school,” he added. “Together with USGBC, we are pleased to make this free resource available to all students seeking to attend colleges that practice, teach and support environmentally-responsible choices. To that end, we highly recommend the terrific schools in this book.”

Academically, Stony Brook offers degrees in Environmental Studies, Marine Sciences, Environmental Design, Policy and Planning, Ecosystems and Human Impact, Sustainability Studies, Coastal Environmental Studies and Business Management with a specialization in Sustainability, which is instrumental in equipping and training the next generation of green leaders. The Advanced Energy Research & Technology Center (AERTC), one of only 25 buildings with a LEED Platinum building in the nation and the first in New York State, is located at Stony Brook and is a true partnership of academic institutions, research institutions, energy providers and industrial corporations. Its mission is innovative energy research, education and technology deployment with a focus on efficiency, conservation, renewable energy and nanotechnology applications for new and novel sources of energy.