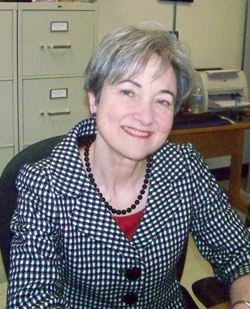 STONY BROOK, N.Y., April 16, 2009— Stony Brook University Professor Alice C. Harris has been awarded a Guggenheim Fellowship, one of the most prestigious honors in academia. Edward Hirsch, President of the John Simon Guggenheim Memorial Foundation, announced the results of the 85th annual U.S. and Canadian competition earlier this month.

The John Simon Guggenheim Memorial Foundation made 180 awards in the U.S. and Canada totaling $6.6 million. The recipients were selected from a group of almost 3,000 applicants. Professor Harris was the only faculty member from a SUNY institution to receive the honor.

Harris, a Professor of Linguistics and Graduate Program Director in the Department of Liguistics, will use the year-long Fellowship to conduct research in a cross-linguistic examination of extended exponence, the occurrence of multiple markers of agreement with a single feature (or set of features) within a single word.

Professor Harris has held major grants from the National Science Foundation, the National Endowment for the Humanities, and the International Research and Exchanges Board. Her books include Georgian Syntax: A Study in Relational Grammar (1981, reprinted in 2009), Diachronic Syntax: The Kartvelian Case (1985), Indigenous Languages of the Caucasus, I:Kartvelian (editor, 1991), Endoclitics and the Origins of Udi Morphosyntax (2002), and (with Lyle Campbell, 1995) Historical Syntax in Cross-Linguistic Perspective, the winner of the 1998 Linguistic Society of America Bloomfield Book Award.  Also in 1998, she won the Earl Sutherland Research Prize at Vanderbilt University, a prize that usually is awarded in the natural sciences.

Since 1925, the John Simon Guggenheim Memorial Foundation has awarded Fellowships to further the development of artists, scholars, and scientists. Guggenheim Fellows are appointed on the basis of distinguished achievement in the past and exceptional promise of accomplishment for the future. Decisions are based on recommendations from hundreds of expert advisors and are approved by the Foundation’s Board of Trustees.

Professor Harris received her Ph.D. from Harvard University in 1976.  She joined the Stony Brook faculty in 2002.  Harris and her husband, James V. Staros, live in Port Jefferson, They have three children and two grandchildren.