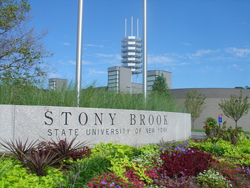 Among all Northeastern colleges, Stony Brook ranked 53rd in earnings potential, ahead of such private universities as NYU, Pace, Boston University, Ithaca, Adelphi and Hofstra.

The actual college rankings were based on the mid-career median pay figures.


“The report highlights the value of a Stony Brook undergraduate degree in securing that first job as well as years later at mid-career,” said Samuel L. Stanley, Jr., M.D., President of Stony Brook University. “This report exemplifies a solid return on investment as demonstrated by Stony Brook’s highly affordable tuition compared to private schools, and other public schools. It’s my job now to see to it that we raise that bar even higher.”

The PayScale report is based on the results of surveys of employees who possess a bachelor’s degree. No higher degrees are included in the survey. Only graduates who are employed full-time and are included. The Seattle-based company surveyed 999 campuses, 97 percent of which had more than 5,000 undergraduate students. The report is available online at www.payscale.com/best-colleges. PayScale bills itself as the leading online provider of employee compensation data.

Part of the State University of New York system, Stony Brook University encompasses 200 buildings on 1,450 acres. In the 50+ years since its founding, the University has grown tremendously, now with nearly 24,700 students and 2,200 faculty and is recognized as one of the nation’s important centers of learning and scholarship. It is a member of the prestigious Association of American Universities, and ranks among the top 100 national universities in America and among the top 50 public national universities in the country according to the 2010 U.S. News & World Report survey. Considered one of the “flagship” campuses in the SUNY system, Stony Brook University co-manages Brookhaven National Laboratory, joining an elite group of universities, including Berkeley, University of Chicago, Cornell, MIT, and Princeton that run federal research and development laboratories. SBU is a driving force of the Long Island economy, with an annual economic impact of $4.65 billion, generating nearly 60,000 jobs, and accounts for nearly 4% of all economic activity in Nassau and Suffolk counties, and roughly 7.5 percent of total jobs in Suffolk County. – See more at: http://commcgi.cc.sunysb.edu/cgi-bin/am2/admin.cgi#sthash.aHcOnnRX.dpuf