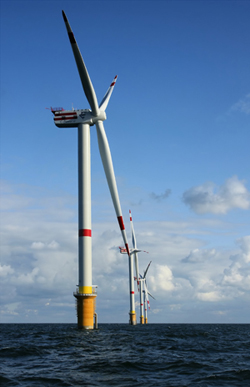 STONY BROOK, NY, April 5, 2010 – The energy needs of the entire human population could potentially be met by converting wind energy to electricity by means of wind turbines. While offshore wind power resources are abundant, wind turbines are currently unable to provide steady power due to natural fluctuations in wind direction and strength. However, offshore wind power output can be made more consistent by choosing project development locations that take advantage of regional weather patterns and by connecting wind power generators with a shared power line, according to a paper by researchers from the University of Delaware and Stony Brook University that is published in the April 5 issue of the
Proceedings of the National Academy of Sciences.


“Making wind-generated electricity more steady will enable wind power to become a much larger fraction of our electric sources,” said the paper’s lead author Willett Kempton, UD professor of marine policy in UD’s
College of Earth, Ocean, and Environment
and director of its
Center for Carbon-free Power Integration.

The researchers analyzed five years of wind observations from 11 monitoring stations along the U.S. East Coast from Florida to Maine. Based on wind speeds at each location, they estimated electrical power output from a hypothetical five-megawatt offshore turbine. After analyzing the patterns of wind energy among the stations along the coast, the team explored the seasonal effects on power output.

“Our analysis shows that when transmission systems will carry power from renewable sources, such as wind, they should be designed to consider large-scale meteorology, including the prevailing movement of high- and low-pressure systems,” said Dr. Kempton.

Dr. Colle explained the ideal configuration. “A north-south transmission geometry fits nicely with the storm track that shifts northward or southward along the U.S. East Coast on a weekly or seasonal time scale,” he said. “Because then at any one time a high or low pressure system is likely to be producing wind (and thus power) somewhere along the coast.”

The researchers found that each hypothetical power generation site exhibited the expected ups and downs, but when they simulated a power line connecting them, the overall power output was smoothed so that maximum or minimum output was rare. In the particular five-year period studied, the power output of the simulated grid never stopped completely.

No wind turbines are presently located in U.S. waters, although projects have been proposed off the coasts of several Atlantic states. This research could prove useful as project sites are selected and developed.

The study was funded by the
Delaware Sea Grant College Program
and CAPES, a Brazilian research council.

About the University of Delaware and the College of Earth, Ocean, and Environment

The College of Earth, Ocean, and Environment (CEOE) strives to advance our understanding of Earth’s natural systems and the interactions of humans with the environment through engaged interdisciplinary research, teaching, and outreach.

The University of Delaware, the flagship institution of the state of Delaware, is one of the oldest Land Grant institutions in the nation, and one of only three institutions to also have Sea Grant and Space Grant status. The university is classified by the Carnegie Foundation for the Advancement of Teaching as a research university with very high research activity — a designation accorded fewer than 3 percent of U.S. colleges and universities. The university is a state-assisted, privately controlled institution with an enrollment of more than 16,000 undergraduates, 3,500 graduate students and 1,000 professional and continuing study students.