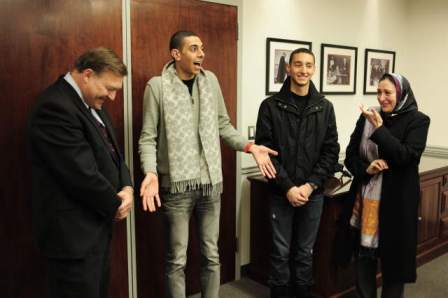 STONY BROOK, N.Y., March 31, 2011—Yaseen Eldik, a Stony Brook University student from Kings Park, has been named a 2011 Truman Scholar. This prestigious award is given each year by the Harry S. Truman

President Stanley shares the news that not only is Yaseen Eldik a finalist, he is also a 2011 Truman Scholar.

Scholarship Foundation to college juniors with “exceptional leadership potential who are committed to careers in government, nonprofit or advocacy sectors, education or elsewhere in the public service and to provide them with financial support for graduate study, leadership training and fellowship with other students who are committed to making a difference through public service.”

“The Truman award speaks to Yaseen’s numerous and wide-ranging accomplishments and to his commitment to being an agent of change,” said Samuel L. Stanley, Jr., M.D., President of Stony Brook University, who invited Yaseen to his office presumably to congratulate him in person as a Truman Scholar finalist, which in itself is a high honor. Dr. Stanley then surprised Yaseen by bringing him into a room filled with his family and mentors, and told him that, “It’s obviously great for Stony Brook that Yaseen is a Truman Scholar finalist and that’s fantastic, but actually something even better than being a finalist is being one of the winners, so Yaseen, allow me to congratulate you.”

“I can’t believe I’m a Truman Scholar winner,” Yaseen said, and thanked everyone who helped him. “I didn’t think I got it…”

Yaseen went on to hug his mother, his mentors and supporters, including those who were in attendance, Charles L. Robbins, Vice Provost for

“This is truly a monumental moment in our lives,” say the proud parents of Yaseen, Dr. Elsayed Eldik and Sanaa Nadim.

“Having watched Yaseen create his own legacy of social justice and now being able to celebrate it on a national level, is an honor.”

The Truman Scholarship will provide Eldik up to $30,000 for graduate study toward a public service-related degree following his graduation from Stony Brook University in 2012.  The Foundation has supported Truman Scholars in many fields of study, including agriculture, biology, engineering, environmental management, physical and social sciences, and technology policy, as well as traditional fields such as economics, education, government, history, international relations, law, political science, public administration, nonprofit management, public health and public policy.

Eldik hopes to use the assistance from the Truman foundation to pursue a joint degree in Law and Public Policy. “While the JD will provide fundamental understanding of laws governing civil rights, the Masters in Public Policy will give me the quantitative analytical tools that will enable me to develop and implement social policy,” notes Eldik. “My ultimate goal is to be someone who not only practices law but shapes it.”

Ultimately, Eldik hopes to become an attorney for the U.S. Department of Justice, focusing on promoting tolerance and defending the civil rights of those affected by discrimination.  “Prejudice can lead to devastating effects, including suicide and hate crimes,” he says.  “Enacting laws that forbid discrimination is often not enough to bring it to an end; education is a significant force for change.  Programs such as It Gets Better, initiated by the Civil Rights Division of the Department of Justice illustrate how civil rights law and educational reform can work together. I would like to work within the Civil Rights Division of the Justice Department to develop similar programs against religious, racial or sexual discrimination.”

After a summer of study and research at Harvard University in 2010, Eldik wrote an article entitled “Islamophobia: Is She A Terrorist?” which focused on attitudes toward Islam and the media images of Muslims in the United States.  “Just as activism, education and legal

reform have diminished the prevalence of racial prejudices and anti-Semitism in the United States, I hope that my future research and activism will strike at the root of Islamophobia,” he says.

“Mr. Eldik is engaging, articulate and passionate,” says Charles L. Robbins, DSW, Vice Provost for Undergraduate Education and Dean of the Undergraduate Colleges and SBU’s Truman Faculty Representative.  “His vision of a better world may be ambitious, but I have no doubt that it is something he will spend his life doing.”

Eldik has been recognized by Stony Brook University with the Humanities Institute Undergraduate Research Award and the Tepper Award for the Outstanding Undergraduate in Public Sociology.  He has been involved in many significant activities, including working with Jewish and Palestinian youth in Jerusalem in order to facilitate their movement beyond long-simmering hostilities between the groups.

“Wherever you look today, you are confronted with a dramatic increase in intolerance for everything that is seen as ‘different’ or ‘other,’ notes Dr. Robbins, who submitted the institutional nomination letter in support of Eldik to The Harry S. Truman Scholarship Foundation. “This is especially true in the overt expressions of Islamaphobia. Mr. Eldik recognizes the power of education and believes he can use education to change the views of young people throughout New York City and beyond.  He wants to demonstrate the ability to change the world one young person at a time.”

A 2008 graduate of Kings Park High School, Mr. Eldik is pursuing a double major in Psychology and Sociology at Stony Brook University. A Global Studies Fellow and Student Ambassador he is also currently President of SBU’s Science and Society Council.

About the Harry S. Truman Scholarship Foundation
Dedicated to education and public service, President Truman often spoke about the importance of promoting young leaders, and envisioned a program for students that would encourage educated citizenship and political responsibility. The foundation was established by Congress in 1975 as the federal memorial to America’s 33rd President.

Each year hundreds of college juniors compete for roughly 60 awards.  The rigorous selection process requires that good candidates have a strong record of public service, as well as a policy proposal that addresses a particular issue in society.  Firmly rooted in President Truman’s belief that education promotes the general welfare of our country, the Truman Scholarship remains committed to encouraging future “change-agents” of America.  Many of those chosen as scholars go on to serve in public office, as public defenders, leaders of non-profit organizations and educators.

Truman Scholars Leadership Week, held at William Jewell College in Liberty, Missouri, introduces new Scholars to the services provided by the Foundation and the many pathways to public service.  Scholars participate in seminars and workshops with distinguished Truman alumni and other public service leaders.  Immediately after college graduation, scholars have the opportunity to participate in a ten-week Summer Institute in Washington, DC.  The Foundation arranges internships with government agencies and nonprofit organizations, seminars and workshops, meetings with Washington policymakers and Truman alumni, and opportunities for community building among Scholars. After Summer Institute, Scholars may elect to stay on in Washington, DC for a full year in the Truman Fellows Program.  Scholars are placed in public service jobs – most with the federal government – while participating in a graduate level public policy course, mentoring opportunities, and a community service program.