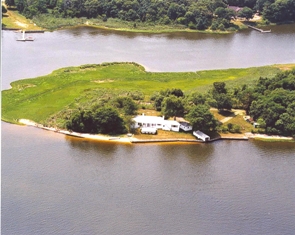 STONY BROOK, N.Y., March 24, 2009  — Stony Brook University today announced that Jack Macrae and Paula Cooper have donated a four-acre residential property on the banks of the Forge River to support the programs of the

School of Marine and Atmospheric Sciences (SoMAS). Valued at $2.7M, the waterfront peninsula represents the largest ever gift to SoMAS. Mr. Macrae and Ms. Cooper also become the fifth largest donors to the University’s seven-year $300 million capital campaign, “The Emergence of Stony Brook.” The property was gifted to the Stony Brook Foundation, which accepts and manages private gifts and grants for the University’s benefit.

“Jack and Paula are deeply concerned about preservation and restoration of local marine waters and their generosity will help SoMAS continue to apply science to these and other marine conservation issues,” said Stony Brook University President Dr. Shirley Strum Kenny. “By supporting marine science education and research, this gift will support and strengthen SoMAS as a principal source of expertise in addressing New York’s marine environmental problems.”

“This incredibly generous donation will help SoMAS extend our knowledge and thereby promote restoration of this vital estuary and other marine habitats like it throughout the region and around the world,” said SoMAS Dean Dr. David Conover.


Jack Macrae was born in New York City and graduated from Harvard University in 1954. In his long career in publishing, he has edited and published such award-winning authors as Jorge Luis Borges, David Levering Lewis, Ed Abbey, Calvin Tomkins, and Hilary Mantel. Today he manages the Henry Holt imprint, John Macrae Books. Jack and his wife, art gallery owner Paula Cooper, have been married more than twenty years and together they own and operate “192 Books,” an independent bookstore on 10th Avenue in Manhattan.

At a luncheon held today at the School of Marine and Atmospheric Sciences in honor of Jack Macrae and Paula Cooper, students and faculty spoke about ongoing research projects conducted on the Forge River and the SoMAS community expressed its gratitude for the couple?s generous support for marine science and conservation.

“Stony Brook University is a vital voice in these lethal times,” said Jack Macrae. “It’s easy enough to rail against environmental degradation, it’s something else to come up with a workable plan that restores life to the Forge River estuary and others like it on Long Island. And that’s where David Conover and the faculty, students, and administration of SoMAS enter the picture.”

The School of Marine and Atmospheric Sciences (SoMAS) is the State University of New York’s center for marine and atmospheric research, education, and public service. The expertise of SoMAS faculty places them in the forefront in addressing and answering questions about immediate regional problems, as well as long-term problems relating to the global oceans and atmosphere. uf