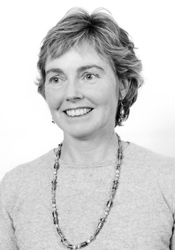 STONY BROOK, N.Y., March 22, 2011 – Just as human babies learn to speak by listening to adults and then hearing their own attempts at speech, so young songbirds learn their distinctive melodies by hearing and then vocalizing the songs of adult birds. Songbirds provide one of the few animal models for the amazing process by which humans learn to speak, and researchers are using them as models for studying both the social cues and biological processes involved. Songbirds also possess networks of brain regions required for song learning, which have many similarities to mammalian brains.

In her laboratory at the University of California San Francisco (UCSF), Allison Doupe, M.D., Ph.D. studies songbirds and the areas of their brains responsible for song learning. Dr. Doupe, Professor of Psychiatry & Physiology at the Keck Center for Integrative Neuroscience, will speak about her work at the 15th Annual Swartz Foundation Mind/Brain Lecture at Stony Brook University on Monday, April 11, 2011 at 4:30 p.m. in the Staller Center for the Arts Main Stage.

The free lecture, intended for a general audience, is sponsored by Stony Brook University and its Department of Neurobiology and Behavior and by the Swartz Foundation, which supports research at 11 centers for theoretical neuroscience. (http://www.theswartzfoundation.org/research_c.asp)

“The Swartz Foundation is honored to present this year’s Mind/Brain lecture by Dr. Doupe,” said Dr. Jerome Swartz, founder and chairman of the Swartz Foundation. “What Dr. Doupe and her colleagues in this field have shown is that, although the parts of the brain that birds use for learning are much smaller and a bit different from ours, the sequence of neural processes and their learning routines are very much like ours, in some ways perhaps even better. In supporting neuroscience research like the work of Dr. Doupe and her post-docs, the goal of the Foundation is to improve our understanding of how the brain works, which will guide scientists toward the practical implementation of discoveries, or solutions to medical problems.”

“Dr. Doupe is not only a world renowned scientist but she is also one of the best public speakers I’ve had the pleasure to hear,” said Lorna W. Role, Chair of the Department of Neurobiology and Behavior at Stony Brook. “She has a wonderful talent for conveying even the most complex aspects of the neurobiology of vocal learning in straightforward and accessible terms.”

Dr. Doupe’s research is concerned with how the nervous system mediates complex behaviors that must be learned. According to Dr. Doupe, song is an intricate motor act that is learned by young birds in two distinct phases, both of which depends on the animal’s auditory experience: first the bird memorizes a tutor song (sensory learning); later, the bird begins to sing, and, in a manner analogous to the acquisition of speech by human infants, uses auditory feedback to refine and correct its vocalizations until it produces an approximate match of the memorized tutor song (sensorimotor learning).

There are critical periods for sensory learning of song, just as there are for some types of human learning. Moreover, a discrete set of brain areas, called the song system, controls song learning and production. Both the song system and the adult song behavior are sexually dimorphic, and are regulated by sex steroids. Finally, song learning and singing are highly social behaviors, and are modulated by social cues. All of these features give birdsong the potential to shed light on the neural basis of learning, and on factors which control and limit learning.

One of the brain regions that is specialized for song learning is the ‘basal ganglia’ circuit. Basal ganglia circuits are critical for learning and control of movements in all vertebrates, and a site of many neurological and psychiatric diseases; however, despite their importance, they remain in many ways mysterious.  The study of the songbird basal ganglia pathway has shown that one of its key functions is to actively generate song variability, which may be important for trial-and-error motor learning, and an underappreciated factor in disease.  Moreover, song, like speech, is strikingly sensitive to social cues, and the song basal ganglia circuit appears to be a major locus of action of social signals.
Dr. Doupe’s laboratory (http://keck.ucsf.edu/neurograd/faculty/doupe.html) is focused on a particular song circuit, the anterior forebrain pathway (AFP). Numerous behavioral studies have suggested that this specialized basal ganglia circuit plays an essential role in song learning. Using a variety of physiological, behavioral, anatomical, and theoretical techniques, Dr Doupe’s research group studies how the different features of song are represented in this network, how the animal’s auditory experience and vocal learning shape its neuronal properties, and what the crucial function of this pathway might be.
Dr. Doupe also studies the auditory pathway of the song system (the Field L complex), which must ultimately contain neurons contributing both to song selectivity and tutor song template memorization, and might also be the source of innate predispositions of birds to learn only the songs of their own species.
Dr. Doupe is the recipient of numerous prestigious awards including a Klingenstein Fellowship, a McKnight Investigator Award, a Searle Scholarship, an EJLB Scholar Award, and a Merck Fellowship. She is a diplomat of the American Board of Psychiatry and Neurology, an elected fellow of the AAAS, and serves on the editorial board of several leading journals, including the Journal of Neuroscience and the Journal of Neurobiology.

Her recent publications include:

The Swartz Foundation was established by Jerry Swartz, Ph.D., in 1994 to explore the application of physics, mathematics, and engineering principles to neuroscience as a path to better understanding the mind/brain relationship. Targeted research projects range from experimental investigations of brain circuitry to computational modeling of large-scale neuronal networks to exploration of nonconscious mental processing—all utilizing physical and mathematical principles. The Swartz Foundation also sponsors conferences, workshops, seminars, and public lectures in brain science, as well as the annual Society for Neuroscience (SfN) Swartz Prize for Theoretical and Computational Neuroscience. Core themes have included communication in brain systems, neurobiology of decision making, and large-scale neural network modeling. More information is available at www.TheSwartzFoundation.org.

Dr. Swartz co-founded Symbol Technologies, Inc., and served as its Chairman and Chief Scientist until his retirement in June, 2004. In 1999, he led Symbol to win the National Medal of Technology, the U. S.’s highest honor for technology innovation. The award was presented to Swartz by President Clinton at the White House on March 14, 2000.