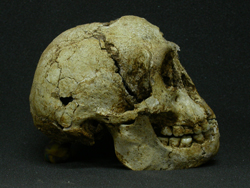 
STONY BROOK, N.Y., March 20, 2009 – Prototype casts of a ‘Hobbit’ skeleton will be publicly displayed for the first time ever at Stony Brook University’s 7th Annual Human Evolution Symposium on Tuesday, April 21, courtesy of the National Research and Development Centre for Archaeology in Jakarta, Indonesia.


As the debate rages on about whether Homo floresiensis – the so called “Hobbit” – fossils discovered on the Indonesian island of Flores in 2003 represent a separate human species, the symposium will bring together the researchers currently in the process of describing and analyzing the remains. Convened by Richard Leakey, the world renowned paleoanthropologist who is Professor of Anthropology at Stony Brook, the public symposium, “Hobbits in the Haystack: Homo floresiensis and Human Evolution,” is hosted by the Turkana Basin Institute at Stony Brook.

“At the symposium, we’ll do our best to separate fact from myth on the controversial issues surrounding this prehistoric hominin, which has gained international celebrity status,” said William Jungers, Distinguished Teaching Professor and Chair of the Department of Anatomical Sciences at Stony Brook. “Prototypes of the entire skeleton of the specimen have never been displayed anywhere, inside or outside of Indonesia. This is a real first.”

Nicknamed “Flo” and referred to as a “Hobbit” due to its brain size – about a third of the size of modern humans – and small physical stature, the enigmatic Homo floresiensis has emerged as one of the most fascinating and perplexing twists to the story of human evolution in recent history.  Dated to only 17,000 years ago, these “Hobbits” possessed a shocking number of primitive morphologies more reminiscent of earlier Homo erectus or even Australopithecus, than modern humans.

The all-day symposium is open to the public. For complete ticket pricing, including student discounts, and additional information, please call (631) 632-5800 or visit http://turkanabasin.org/humanevolution.