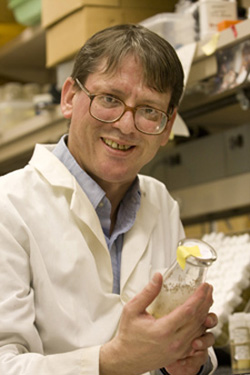 
STONY BROOK, NY, March 9, 2009 – Animals have an astonishing ability to develop reliably in spite of variable conditions during embryogenesis. New research, published in parallel this week in PLoS Biology and PLoS Computational Biology, addresses how living things can develop into precise, adult forms when there is so much variation present during their development stages. A team led by John Reinitz at Stony Brook University, and funded by the National Institutes of Health, shows how fruit fly embryos can “forget” initial incorrect versions of their body plan and develop into recognizable adult flies.


“Our results show that groups of genes can act on one another to reduce variation and highlights the importance of genetic networks in generating robust development,” said Dr. John Reinitz.

Canalization, a principle of developmental biology described more than 60 years ago by C.H. Waddington, is the property of embryonic development whereby genetic interactions can adjust biochemical reactions to bring about reliable developmental outcomes, despite variable conditions. A great deal of progress has been made in understanding the buffering of genotypic and environmental variation, and individual mutations that reveal variation have been identified. However, the mechanisms by which genetic interactions produce canalization are not yet well understood, because this requires molecular data on multiple developmental determinants and models that correctly predict complex interactions.

“We make use of gene expression data at both high spatial and temporal resolution for the gap genes involved in the segmentation of the fruit fly Drosophila embryo,” said Dr. Reinitz. “We also apply a mathematical model to show that cross regulation among the gap genes is responsible for canalization in this system.”

The model predicted specific interactions that cause canalization, and the prediction was validated experimentally.

“With canalization, if there is too much of one protein in the embryo, a network of genes could theoretically change the amount of that protein present, so that the outcome for the embryo was normal,” said Dr. Reinitz. “Since this principle was suggested, a great deal of progress has been made in understanding the buffering of variation, but the specific mechanisms by which genetic interactions contribute to canalization have remained unclear – until now.”

The authors started by measuring the concentrations of certain proteins in normal and mutant Drosophila embryos, at an early stage of development when the embryo looks like a hollow rugby ball. Each protein is synthesized from a gene, and each of the proteins measured has a regulatory role; they can turn their own gene – and others – on and off. The authors created a series of equations that could describe the diffusion of proteins and their action on their own gene and on other genes in the network. These equations show that a wide range of initial conditions (in terms of protein concentrations) lead to several possible final conditions. These final conditions, called fixed points, govern or describe the final state of the segmentation process for the fruit fly embryo. They do not allow for variability in the embryo, and they ‘forget’ the initial information. This mathematical property combined with their accuracy in describing the biological processes can be used towards the theoretical explanation for Waddington’s canalization model.

“This study is an example of how biology is becoming a precise and quantitative field, like physics” says Reinitz.

This work is the result of an international collaboration of authors, including Manu of Stony Brook University; David H. Sharp of the Los Alamos National Laboratory, and Svetlana Surkova and Maria Samsonova of the St. Petersburg State Polytechnical University.

PLEASE ADD THE LINK TO THE PUBLISHED ARTICLE IN ONLINE VERSIONS OF YOUR REPORT: http://biology.plosjournals.org/perlserv/?request=get-document&doi:10.1371/journal.pbio.1000049

Additionally, for the accompanying article in PLoS Computational Biology:

PLEASE ADD THIS LINK TO THE PUBLISHED ARTICLE IN ONLINE VERSIONS OF YOUR REPORT: http://dx.plos.org/10.1371/journal.pcbi.1000303