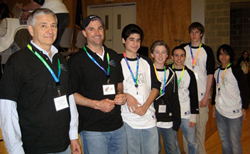 Winning team members awarded $1,000 each and a trip to St. Petersburg, Florida


The Bay Scallop Bowl is one of 25 regional competitions that take place nationwide as part of the National Ocean Sciences Bowl, an annual competition that tests high school students on their knowledge of oceanography and related disciplines.

After many rounds of competition between the 16 participating teams from across New York, Longwood High School, Locust Valley High School, and Bronx High School of Science had each lost only a single round, and last year’s Bay Scallop Bowl winner, Mount Sinai High School School, was undefeated.

The team from Farmingdale High School was selected for the 2010 Bay Scallop Bowl Sportsmanship Award and won several oceanography books for their team library. The Farmingdale High School team attended Saturday’s event planning only to observe the competition in order to prepare themselves to participate next year. But when another school dropped out, the Farmingdale team was willing to step in at the last minute and compete.


The Bay Scallop Bowl is supported in part by financial contributions from the Consortium for Ocean Leadership, the Alfred and Jane Ross Foundation, the School of Marine and Atmospheric Sciences, Battelle Memorial Institute, New York Sea Grant, the Blue Ocean Institute, the Institute for Ocean Conservation Science, and the New York State Marine Education Association.  Janet Werner of Deer Park High School donated the oceanographic books for the winners of the Sportsmanship Award.

At the concluding ceremony, Bill Wise thanked his event co-coordinator, Kim Knoll, and volunteer coordinator, Anne Cooper Ellefson, as well as the more than 80 volunteers required to make the event a success. He told the students: “The Bay Scallop Bowl is an opportunity to learn as much as you can about our oceans then pit yourself against other people who know the material quite well and see how you stack up. It has been wonderful to see the enthusiasm and good sportsmanship that you brought to the competition this year.” –