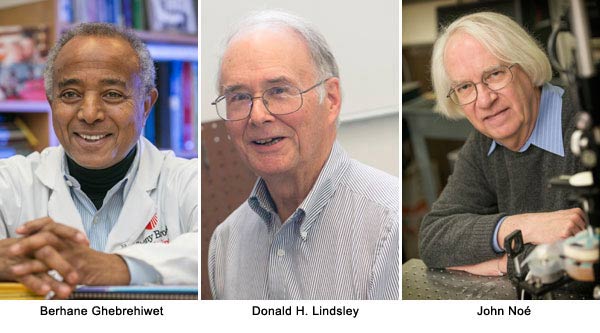 STONY BROOK, NY, March 4, 2014-Stony Brook University faculty mentored three of the forty high school students named as finalists in the 2014 Intel Science Talent Search. Kathy Camenzind, Aron Coraor, and Emily Pang were selected for the research they did on campus, where they worked with faculty and graduate student mentors. The students will be in Washington D.C. from March 6-12 for the final judging and a much anticipated opportunity to meet President Barack Obama, who will greet the finalists.

Here are their stories.

Most teens these days barely have time for meals, but for Kathy Camenzind a leisurely dinnertime conversation started her on the path to meeting the President. The project that landed her a place as a finalist in the 2014 Intel Science Talent Search originated in a mealtime chat with her father during which he mentioned laser tweezers, devices that use a focused laser beam to manipulate small particles such as cells. Kathy was immediately interested, and developed a presentation for her high school AP Chemistry class.

“I heard a version of this talk just after Kathy arrived on campus,” says John Noé, Executive Director of the Laser Teaching Center, and her mentor during the 2013 Simons Summer High School Research program. “I was blown away by her presentation—she not only understood all the technical issues, she also had a very mature grasp of the history of the field.”

Kathy, a senior at California High School in San Ramon, CA, built a device at Stony Brook that included, Noé says, a simple, ingenious mechanism for driving the microscope stage at an accelerating rate in order to quantify the tiny (measured in piconewtons) trapping force. “The mechanism was made in large part from foam tape!” he recalls. “She later developed methods for recording and analyzing images of her trapped particles. She did this on her own, with minimal assistance—an impressive accomplishment.”

Kathy liked the way her mentor encouraged that self-reliance. “Dr. Noé allowed us to get hands-on learning, and build our optical setups almost entirely by ourselves, with guidance only when we needed it. Ultimately, I think that was what really made this experience so valuable.”

Kathy’s project is titled Quantifying Trapping Forces in a Simplified Optical Tweezers Setup. She’s glad she picked Stony Brook for her research. “I think that the main reason I chose to attend the Simons Program was because it had a really excellent reputation for not only allowing high school students to have an opportunity to participate in research, but also to really be an integral part of the research team and get an experience that they could learn from.”

Kathy praises her mentor’s help in preparing for the Intel competition. “Dr. Noé had many phone

conversations with me long after working hours to help me understand my project and its purpose better, as well as go over the process of scientific writing,” she says. “His goal wasn’t to help us win competitions, but rather to teach us as scientists what it means to think logically and concisely. That’s something that we’ll all carry with us throughout our careers.”

She’ll carry memories as well. “My experience at Stony Brook was great, especially being able to spend the summer with other high-school students who are all very smart and passionate about science,” she says. “I now know what research is like, and how exciting real-world science and its applications are compared to what you learn in a classroom.”

The Coraor family seems to have a knack for the Intel Science Talent Search. Aron Coraor, who is a 2014 finalist, has a brother Everett, now a senior at Stony Brook, who was a semifinalist in 2010. Their sister Juli was a finalist in 2012.

Aron, a senior at Huntington High School in Huntington, NY, began working with Donald H. Lindsley, Distinguished Professor Emeritus in Geosciences, in the summer of 2012. “He then did most of his Intel work during the spring semester of 2013,” Lindsley says. “While I was the Intel mentor of record, Aron benefited equally from advice by Professor Hanna Nekvasil in the Department of Geosciences, in whose lab he did the work.”

Aron blossomed quickly when he first came to campus. “In the space of a few weeks, he grew from a high school junior doing grunt work in my lab to performing at the senior grad student level,” Lindsley recalls. “When we realized this, we offered to turn over the Lunar Highlands project to him. Although the original idea for the project was ours, Aron quickly made it his own, coming up with some solutions to knotty experimental problems.”

Aron’s entry in the competition is titled, Pressure Dependent Azeotropic Melting Relations in the Mg2SiO4-Fe2SiO4-NaAlSi3O8-CaAl2Si2O8 System: a Critical Role in Lunar Highlands Formation? “My Intel project was designed to help explain the formation of the Moon,” Aron says. Dr. Lindsley says the interdisciplinary undertaking was tailor-made for him. “One of Aron’s strengths is that he recognizes no boundaries in science—physics, chemistry, and geology are seamless in his view, and he’s very good in seeing connections among them.”

Aron explains why he picked SB to explore those connections. “I chose to conduct research at Stony Brook because of its outstanding research faculty and facilities,” he says. “I felt that Stony Brook offered me the chance to develop real research skills, and would help prepare me for a future academic career in the sciences. I greatly admire my mentor, Dr. Lindsley, and feel that his tutelage was instrumental in the development of both my Intel research project and my scientific critical thinking skills.”

Aron helped SB researchers with another project that summer and during the Fall 2012 semester, when he was on campus taking an Honors Physics freshman course. After acceptance into the 2013 Simons Summer High School Research program, he worked in the lab of Matthew Dawber, Assistant Professor in the Department of Physics and Astronomy. Dr. Dawber had been his sister Juli’s mentor when she was an Intel finalist.

“I had heard great things about the Simons Program from my sister,” Aron says. “Dr. Dawber was incredibly helpful, friendly, and instructive throughout my experience. The Simons Program presented to me a great opportunity to expand my experience with research, closely interact with and learn from professors and graduate students, and to meet with other scientifically minded high school students from around the country.”

Overall at Stony Brook, Aron has taken physics and math courses through the Young Scholars Program with a series of different professors, and conducted separate research projects in two different departments. “I have had an unforgettable experience at Stony Brook, and I wholeheartedly recommend the university to any high school student,” he says.

Emily Pang is brimming with scientific curiosity, but her research has a mission too. The senior at Dougherty Valley High School (San Ramon, CA) participated in the 2013 Simons Summer High School Research program, where she did the work that is now being judged for the Intel award. Her subject, The Opposing Roles of Tumor Suppressive cC1qR and Oncoprotein gC1qR as Mechanisms for Inhibiting Cancer Pathogenesis, tackles one of many aspects of cancer.

“When I realized the lab I had the privilege of working in had a research focus on the C1q protein complex, I immediately began reading up on it,” Emily says. “What struck my interest was the relationship between the

C1q protein complex and its corresponding receptors and cancer. Cancer is such a prevalent issue globally, yet so much of it remains a mystery. I wanted to involve myself in the quest for solutions.”

She says Stony Brook was the right place to study. “I chose the Simons Program because I could find no better location for an opportunity to delve into cutting-edge research at the frontier of scientific advancement,” she says.

Emily was placed in the lab of Berhane Ghebrehiwet, a Professor of Medicine and Pathology in the Stony Brook School of Medicine. Dr. Ghebrehiwet is one of Stony Brook’s most experienced and most successful mentors and has been doing it for more than 20 years. He worked with Intel finalist Nithin Tumma, who won the competition in 2012. The very first student he mentored, Dr. Tara L. Huston, became an Intel semifinalist, and is now an Assistant Professor of Surgery at Stony Brook. Another protégé went on to become an internist at a nationally recognized hospital and a medical consultant to ABC and FOX News.

“It is an honor to be a mentor,” Dr. Ghebrehiwet says. “Young students at this age are very impressionable, and they absorb everything you teach them. So as mentors, it is our duty to nurse and shape the talent that these students have for future leadership in their respective fields. If we do, then the future of American science will be in good hands.”

Emily makes Dr. Ghebrehiwet feel good about that future. “Emily, like most of the talented students who come to Stony Brook each year, was not only fun to work with but also inquisitive, disciplined, and hard working. Each day, she couldn’t wait to discuss the results of her experiments so that she could plan the next set of experiments.”

Emily gives the professor similarly high marks for his tutelage. “Professor Ghebrehiwet treated me as a graduate student, allowing me to freely propose my own ideas and thoughts,” she says. “I cannot thank him enough for not only being a brilliant mentor on all things scientific, but also for affording me with wise advice and insight whenever I struggled.”

Struggle is a big part of the process, Dr. Ghebrehiwet believes. “I try to teach my students that the first step to success is failure, which is along the lines of Winston Churchill’s famous quotation: ‘Success is the ability to endure failure after failure without losing your enthusiasm.’ Failure tests your resolve, and teaches you how to dust off and spring forward.”

The proof is in the protégé. “The Simons Program provided me with an opportunity that has expanded my aspiration and horizons,” Emily says. “I was introduced to an atmosphere of spirit, rigor, and collaboration that was nearly unparalleled to any other environment I’ve been exposed to. Before I trekked beyond the familiar Californian borders and stepped onto Long Island, I could not have predicted how much my life and perceptions would be transformed.”