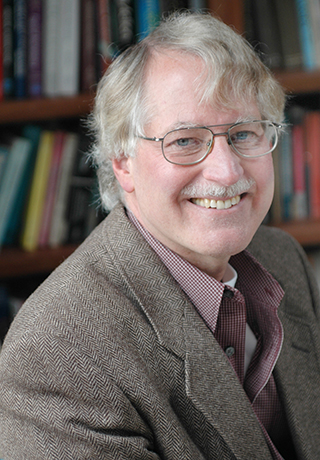 STONY BROOK, NY, March 4, 2014-Stony Brook University’s Ken A Dill, Distinguished Professor of Physics and Professor in the Department of Chemistry, will be presenting new research on the mechanisms of evolution, Physical limits of cells and proteomes, at the March meeting of The American Physical Society (APS), a gathering of leading physicists, which focuses on some of the most dynamic and cutting-edge research areas in physics.

Dill, Director of the Laufer Center for Physical & Quantitative Biology, and his colleagues are looking at new ways of understanding the mechanisms of evolution, both theoretically and experimentally.

One of the basic drivers of evolution is natural selection, the gradual process by which traits take hold or disappear within a population depending on whether or not they confer a competitive advantage. Many of the traits nature selects for can be traced to small, random genetic changes in DNA that alter the dynamics or activity of individual proteins within an organism’s cells and confer some profound survival advantage, like the ability to resist a plague (or a catastrophic disadvantage, like the inability to resist the cold when the ice age cometh).

Now new work by Dill is suggesting that in addition to these traditional mechanisms of natural selection, evolution may also select for traits not linked to individual genes but to the overarching physical properties of a cell — how their proteins are affected by heating or salty solution or how snugly packed they are, for instance. These sorts of properties depend not just on a few biological molecules within the cell but many of them taken together.

At the March APS meeting Dill will discuss how theoretical calculations predict and experimental measurements confirm that the most optimal way to pack proteins into a bacterial E.coli cell is to fill them to about 20 percent of capacity — the point at which the packing is tight enough to enhance diffusive interactions between the proteins but not so tight that it impinges their movement. Observations like this are leading to new perspectives on evolution that may shed light on why cells have the size and composition they do and why they operate in their preferred temperature ranges.

Professor Dill earned his PhD in Biology from UCSD, La Jolla and did Postdoctoral Fellowship work in Chemistry at Stanford University. He is interested in the physics of how proteins fold; the microscopic origins of the unusual physical properties of water; the foundations and applications of variational entropy-based principles in statistical physics; and how the laws of physics constrain and enable the biological properties and evolution of cells.


The Louis and Beatrice Laufer Center is a hub for research in Physical and Quantitative Biology at Stony Brook University. It aims to advance biology and medicine through discoveries in physics, mathematics and computational science.

Laufer Center researchers study biochemical networks in cells. Center researchers use computational modeling to understand how proteins fold; to design drugs for high-affinity binding to proteins; to learn how protein motions cause biological mechanisms; to explore the physical forces that drive proteins to aggregate in neurodegenerative diseases such as Parkinson’s and Alzheimer’s; to develop combinatorial computer algorithms for designing DNA sequences for synthetic biology; and more.