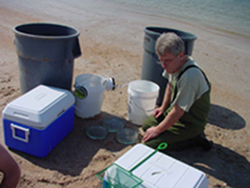 In an intriguing 21st century example of Darwinism, researchers demonstrate that fish will again grow to larger sizes and produce more young when size-selective fishing is eased

STONY BROOK, NY, March 3, 2009 – “Undesirable” evolution in fish – which makes their bodies grow smaller and fishery catches dwindle — can actually be reversed in a few decades’ time by changing our “take-the-biggest-fish” approach to commercial fishing, according to groundbreaking new research published today by Stony Brook University scientists in
Proceedings of the Royal Society B
.


Intensive harvesting of the largest fish over many decades, while leaving the small fish behind, may have unintentionally genetically reprogrammed many species to grow smaller, said lead author Dr. David O. Conover, Professor and Dean of the Stony Brook University School of Marine and Atmospheric Sciences in Long Island, New York. Although Charles Darwin showed 150 years ago that evolution equips life forms to be better adapted to prosper in their environment, unnatural evolution caused by man’s size-selective fishing is causing fish to be smaller, less fertile, and competitively disadvantaged. This has also been a loss for commercial fishers who seek big fish for their livelihoods, recreational anglers in pursuit of trophy fish, and seafood consumers who desire large portions on their plates.

This study demonstrates for the first time ever that detrimental evolution in fish can be reversed, and pokes a gaping hole in theoretical models suggesting that genetic changes are impossible to “undo.”  It is the result of 10 years of research largely supported by a generous grant from the Institute for Ocean Conservation Science at Stony Brook University.


“This is good news for fisheries, but it also shows that reversal is a slow process,” Dr. Conover said. “Over time, fish can return back to their normal size but the reversal process occurs much more slowly than the changes caused by fishing. So the best strategy is still to avoid harmful evolutionary changes in the first place”.

Current fishery management plans are generally based upon assessment methods which do not incorporate long-term evolutionary dynamics. It could take years before evolutionary change is incorporated into such plans, since the concept remains quite controversial among scientists.

“It took scientists a long time to reach a consensus on climate change, and acceptance of this phenomenon might require a long time, too,” Dr. Conover said.

Dr. Ellen Pikitch, Executive Director of the Institute for Ocean Conservation Science, said, “We now have proof that the negative ramifications of common fishing practices can linger for decades, leaving future generations to grapple with a legacy of diminished ocean productivity.  It is essential that fishing be transformed to minimize its evolutionary and broader ecological consequences.”  Evolutionary dynamics are a fundamental principle of ecosystem-based fishery management (EBFM), a holistic approach that considers the connectedness of different species and the links between species and environmental influences, rather than managing each species in isolation. Dr. Pikitch was among the earliest proponents of EBFM, and lead author of a seminal 2004 article in Science on the concept.

“We have interfered extensively with the natural course of things, and while it is very encouraging that the harmful effects of size-selective fishing may be reversible, the length of the recovery period is sobering,” said Dr. Pikitch, who is also a Professor of Marine Science at Stony Brook University. “Restoration of ocean fisheries requires prompt and widespread adoption of an ecosystem-based approach to fisheries management.”

Fishery management is today largely based upon “minimum size limits,” which ban capture of fish below a given size, species by species. With few exceptions, maximum size limits do not exist, so the large fish can easily be “fished out.” “This is really bad news for fish because unlike humans, the bigger and older a fish is, the more offspring it produces,” Dr. Conover said. “We’re talking about a big fish producing ten times more eggs than the same species in a smaller size, but unfortunately, current fishery regulations make it dangerous to be big,” The solution is to design regulations to protect large fish, he said. “If we stopped fishing out the largest fish, there would again be a benefit to being big, and genetic changes will occur that gradually trigger a population rebound”.

Dr. Conover and colleagues worked at the Flax Pond Marine Laboratory on the north shore of Long Island, with six wild populations of the Atlantic silverside (Menidia menidia) captured from Great South Bay, NY. This marine harvested species is common to the east coast of North America. Researchers selectively removed the largest fish over the course of five generations (for the silverside, each generation amounts to about one year). They then allowed five generations of recovery, in which no size-selective fishing occurred. Mean body size of the fish declined rapidly during the size-selective fishing period. During the recovery years, body size gradually rebounded.

In this experiment, Dr. Conover’s team estimated that full recovery would take about 12 generations, but recovery time in the wild could be shorter or longer depending upon the species and its environment. If their estimate is roughly correct, however, it means that recovery could take many decades for commercially harvested fish species, since they typically have a generation time of three to seven years. Cod have a five-year generation time, for example, which equates to a 60-year recovery period. Evolutionary change may explain why several cod stocks have still not returned to historical body size and abundance even though the fishery was closed years ago, Dr. Conover said.

In addition to Dr. Conover, authors on this paper are Dr. Stephan B. Munch of the Stony Brook University School of Marine and Atmospheric Sciences, and Dr. Stephen A. Arnott of the South Carolina Department of Natural Resources Marine Resources Research Institute.

“Reversal of evolutionary downsizing caused by selective harvest of large fish.” In: Proceedings of the Royal Society B, the Royal Society’s flagship biological research journal. On the web at http://publishing.royalsociety.org/index.cfm?page=1569.