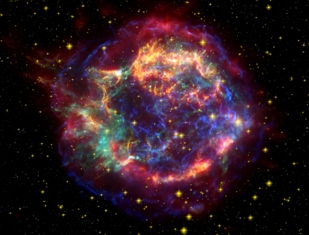 STONY BROOK, N.Y., March 1, 2011 – Scientists at Stony Brook University, and colleagues, have discovered evidence for a superfluid state of neutrons in the neutron star at the center of the supernova remnant,

This image of Cassiopeia A is a composite of X-ray, optical and infrared exposures which have been digitally combined. The neutron star is the cyan dot located near its center. (Image credit: O. Krause et al., Steward Observatory, Spitzer Science Center, Caltech’s Jet Propulsion Laboratory and NASA.)

Cassiopeia A. Neutron stars are the compressed remnants of  supernova explosions—and are among the most inexplicable objects in the universe.

The findings, entitled, Rapid Cooling of the Neutron Star in Cassiopeia A Triggered by Neutron Superfluidity in Dense Matter, are reported in
Physical Review Letters
.  This represents the first direct evidence for a neutron superfluid—a friction-free state of matter, at the core of a neutron star—and has important implications for understanding nuclear interaction in matter at the highest known densities.

Cassiopeia A—which is 11,000 light years from Earth—exploded as a supernova, and light from that explosion reached the Earth about 330 years ago. The explosion left behind a neutron star that became the subject of studies by the Chandra X-ray Observatory maintained by NASA.  In 2010, it was reported that the star is cooling faster than first expected.

“We came to the conclusion that this cooling rate can only be explained by superfluid neutrons in the core of the star,” says James Lattimer, Ph.D., Professor of Physics and Astronomy at Stony Brook University.

In the superfluid state, the flow of the liquid encounters no resistance due to viscosity.

“This unusual state of condensed matter is very rare and it has been studied in detail only at very low temperatures, for example, in liquid Helium,” explains Dr. Lattimer.  “Discovering evidence for this phenomenon in a neutron star is especially interesting since the temperature, pressure and density of the material are all extremely high.”

The Nuclear Theory group was founded by Distinguished Professor (Emeritus) Gerry Brown. “Dr. Brown and Dr. Lattimer established Nuclear Astrophysics at Stony Brook, and their collaboration produced many accomplished Ph.D. alumni,” said Laszlo Mihaly, Chairman of the Department of Physics and Astronomy at SBU.   “The success of this group of researchers testifies to the legacy of Dr.Brown, a pioneer in nuclear astrophysics.”