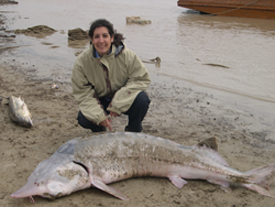 Joint study by American and Kazakhstani scientists shows reducing adult mortality, rather than relying on hatchery supplementation, is key to recovery of beluga sturgeon

STONY BROOK, NY, February 25, 2010 – A first-of-its-kind study of a Caspian Sea beluga sturgeon (Huso huso)fishery demonstrates current harvest rates are four to five times higher than those that would sustain population abundance. The study’s results, which will be published in an upcoming issue of the journal Conservation Biology, suggest that conservation strategies for beluga sturgeon should focus on reducing the overfishing of adults rather than heavily relying upon hatchery supplementation.


The quantitative analysis was conducted through an unprecedented collaboration of scientists from the United States and Kazakhstan.  Data used in the study were collected in the Ural River, the only remaining Caspian Sea river where beluga sturgeon reproduce unhindered by dams.

“This is the first time that anyone has calculated sustainable harvest limits for Caspian Sea beluga sturgeon and compared them to present fishing pressure,” said Dr. Phaedra Doukakis, Senior Research Scientist with the Institute for Ocean Conservation Science at Stony Brook University and lead author of the study. “We can finally attach numbers to what people have suspected – that current management of Caspian Sea sturgeon fisheries will not prevent further population decline. We hope that this study provides the evidence needed to shift mindsets and management practices,” added Dr. Doukakis.

Populations of beluga sturgeon have declined by nearly 90 percent in the past several decades due to the high demand for black caviar, inadequate management, and habitat degradation. Black caviar, the unfertilized roe (eggs) of the beluga sturgeon, is the most valuable of all caviar, and can be sold for as much as $8,000 for one kilogram (2.2 pounds). There has been grave concern about increasingly dwindling numbers of this already depleted species, which has gone extinct in the Adriatic Sea and is on the brink of extinction in the Azov Sea.

The results of the analyses* conducted by the participating scientists show that fishing pressure far exceeds sustainable levels and that limiting the take of adult and subadult sturgeon will contribute more to the population growth rate as compared with hatchery supplementation.


The beluga sturgeon can live more than 100 years, and do not reach maturity until 9 to 20 years of age. The researchers found that the optimal age of first harvest is 31 years because older and larger fish produce more eggs. Conservation efforts would be much more effective than current practices if minimum size limits for fishing targeted this optimum age for first capture and if the illegal harvest of subadult fish were reduced. These fishing limits would allow the survival of subadult and adult females and would increase population productivity by ten times that achieved by hatchery supplementation, according to the study’s findings.

Currently the fishery management focus for beluga sturgeon conservation is on using hatcheries to sustain the population. However, survival of hatchery-reared fish in the wild is thought to be very low. Additionally, genetic diversity may be compromised by hatchery practices, which can potentially jeopardize the long-term survival of all beluga sturgeon. Despite the potential threats posed by hatchery fish, regulatory agencies allow more fishing (higher quotas) by countries with higher hatchery output.

“This study clearly shows that reducing the mortality of wild beluga sturgeon adults is a much more effective conservation strategy than hatchery supplementation,” said Dr. Ellen Pikitch, Executive Director of the Institute for Ocean Conservation Science and a co-author of the study. “Ten hatchery fish would need to be produced to achieve the same conservation benefit as preventing the kill of a single wild beluga sturgeon. It’s clear that the focus of sturgeon management in the region has been misplaced and must change. A shift in practices could prevent further declines in beluga sturgeon and ultimately promote recovery,” added Dr. Pikitch.

The Convention on International Trade in Endangered Species (CITES) listed beluga and most other species of sturgeon as threatened in 1998 with an Appendix II listing. However, beluga sturgeon numbers have declined by approximately sixty percent from the time of the listing through 2005 showing that existing management of beluga sturgeon fisheries has not been effective.  The new research results suggest that a change in management focus is critical to stabilization and recovery of the species.

Drs. Pikitch and Doukakis will present the findings of this study and related research on the status of beluga sturgeon at a meeting they are convening on March 18, 2010 at the 15th Conference of Parties to CITES in Doha, Qatar.

*Scientists participating in the study used yield per recruit, spawning stock biomass per recruit, and elasticity analyses to make their evaluations. The first two analyses use life history parameters to determine acceptable levels of fishing mortality. The elasticity analysis uses similar parameters to pinpoint those parts of the fish’s life history that contribute most to population growth.

Read the abstract of the study, “Management and Recovery Options for Ural River Beluga Sturgeon,” online at:

The Institute for Ocean Conservation Science at Stony Brook University is dedicated to advancing ocean conservation through science. The Institute transforms real-world policy while pursuing serious science, both of which are essential for ocean health. Visit http://oceanconservationscience.org. –