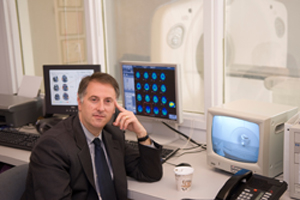 STONY BROOK, N.Y., February 24, 2010
– The recovery of consciousness following traumatic brain injury and recent advances in neuroimaging and deep brain stimulation will be discussed at the 14th Annual Swartz Foundation Mind/Brain Lecture at Stony Brook University on Monday, March 15, 2010 at 4:30 p.m. in the Staller Center for the Arts.


The free lecture, intended for a general audience, will be given by Nicholas D. Schiff, M.D., Director of the Laboratory of Cognitive Neuromodulation at Weill Cornell Medical Center in New York. The Mind/Brain Lecture series is sponsored by Stony Brook University and its Department of Neurobiology and Behavior, and by the Swartz Foundation, which supports research at 11 centers for theoretical neuroscience.

“Theoretical brain science research, as supported by the Swartz Foundation, goes hand-in-hand with the groundbreaking clinical work of Dr. Schiff,” said Jerry Swartz. “I expect great strides to be made in the future in the related areas of medical and clinical technology and in neurotechnology (e.g., the next generation of artificial intelligence), as we increase our understanding of the basic principles and mechanisms of consciousness.”

Despite major advances in neuroscience, recovery of consciousness after brain injury remains poorly understood. How does recovery happen and what can doctors do to help patients escape their imprisoned minds? At the origin of this challenge is the surprising degree of uncertainty of brain function that may be present when confronted with unresponsive patients. Dr. Schiff will review studies that have expanded the understanding of the potential for late recovery of cognitive function and provide insight into possible biological mechanisms that may lead to the “circuit-level” recovery of consciousness.

The discussion will focus on novel neuroimaging paradigms that allow assessment of a patient’s ability to follow commands and communication in the absence of overt behavior, observations of marked behavioral improvements following pharmacological interventions, and the results of a study by Dr. Schiff and his team demonstrating behavioral improvements with deep brain stimulation in a severely brain-injured man who had remained in a minimally conscious state for six years. Collectively, these experimental and clinical data support further research to develop diagnostic and investigational therapeutic approaches at the ‘circuit-level’ to better address the problem of recovery of consciousness after severe brain injury.

In a study published this month in The New England Journal of Medicine, researchers detected signs of consciousness in patients and were able to communicate with one of them. They used functional magnetic resonance imaging (fMRI) to scan patients’ brains and to record activity generated in their brains following verbal prompts and questions from doctors. The researchers found signs of awareness in four patients, one of whom was able to answer basic yes or no questions by visualizing different scenes the researchers asked him to imagine, which stimulated different parts of his brain. Experts say the study could have a major impact on how severe head injuries are diagnosed. At the same time, it raises ethical questions as to whether severely injured patients should be consulted on their care.

The work “changes everything,” Dr. Schiff was quoted as saying of the study in New Scientist. “Knowing that someone could persist in a state like this and not show evidence of the fact that they can answer yes/no questions should be extremely disturbing to our clinical practice.”

Dr. Schiff is a physician-scientist with expertise in neurological disorders of consciousness. In 2008, he was named to TIME Magazine’s “TIME 100” list of the world’s most influential people for opening a new frontier in deep brain stimulation when he and his team helped to “awaken” a brain-damaged man who had been in a minimally conscious state for six years. He is Associate Professor in the Department of Neurology and Neuroscience, Department of Public Health, and in the Graduate Program in Neuroscience at Weill Cornell Medical College. He directs the Laboratory of Cognitive Neuromodulation at Weill Cornell, is Adjunct Faculty at the Rockefeller University, and is a diplomat of the American Board of Psychiatry and Neurology.

Dr. Schiff’s research efforts bridge basic neuroscience and clinical investigative studies of the pathophysiology of impaired consciousness using state-of-the art neuroimaging and neurophysiologic techniques. This research program has provided new understanding of cerebral activity in severely brain injured-patients. Most recently, Dr. Schiff and colleagues have taken insights into the neurophysiological mechanisms of arousal regulation and of deep brain electrical stimulation techniques to demonstrate evidence that long-lasting, severe cognitive disability may be influenced by modulation of the central thalamus. This work is an important foundation for developing further understanding of both the mechanisms of recovery of consciousness and basic mechanisms underlying consciousness in the human brain.

Dr. Schiff is an elected member of the American Neurological Association and the recipient of several awards, including the 2007 Research Award for Innovation in Neuroscience from the Society for Neuroscience. His research is currently supported by the NIH-NICHD, NIH-NINDS, NEI-NIDDR, private foundations (The Jerold B. Katz Foundation, James S. McDonnell Foundation, and Swartz Foundation), and industry (IntElect Medical, Inc).

The Swartz Foundation was established by Jerry Swartz in 1994 to explore the application of physics, mathematics, and engineering principles to neuroscience as a path to better understanding the mind/brain relationship. The Foundation supports post-doc research in theoretical neuroscience at 11 universities and scientific institutions at Columbia University, Cold Spring Harbor Laboratory, Harvard University, Princeton University, Yale University, and UC San Diego, and, in partnership with the Sloan Foundation, at their five Centers for Theoretical Neurobiology at Brandeis University, Cal Tech, NYU/Courant, the Salk Institute, UC San Francisco.Targeted research projects range from experimental investigations of brain circuitry to computational modeling of large-scale neuronal networks to exploration of nonconscious mental processing—all utilizing physical and mathematical principles. The Swartz Foundation also sponsors conferences, workshops, seminars, and public lectures in brain science, as well as the annual Society for Neuroscience (SfN) Swartz Prize for Theoretical and Computational Neuroscience. Core themes have included communication in brain systems, neurobiology of decision making, and large-scale neural network modeling. More information is available at
www.TheSwartzFoundation.org.

Part of the State University of New York system, Stony Brook University encompasses 200 buildings on 1,600 acres. In the 50+ years since its founding, the University has grown tremendously, now with nearly 24,000 students and 2,100 faculty and is recognized as one of the nation’s important centers of learning and scholarship. It is a member of the prestigious Association of American Universities, and ranks among the top 100 national universities in America and among the top 50 public national universities in the country according to the 2008 U.S. News & World Report survey. Considered one of the “flagship” campuses in the SUNY system, Stony Brook University co-manages Brookhaven National Laboratory, joining an elite group of universities, including Berkeley, University of Chicago, Cornell, MIT, and Princeton, that run federal research and development laboratories. SBU is a driving force of the Long Island economy, with an annual economic impact of $4.65 billion, generating nearly 60,000 jobs, and accounts for nearly 4% of all economic activity in Nassau and Suffolk counties, and roughly 7.5 percent of total jobs in Suffolk County.