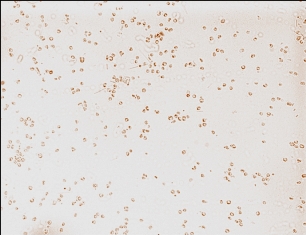 The impact of harmful algal blooms have intensified in recent decades and most research has focused on chemical nutrients such as nitrogen and phosphorus as causative agents of these blooms.

A team of 33 researchers led by Christopher J. Gobler, Ph.D., Associate Professor of the School of Marine and Atmospheric Sciences at Stony Brook University, have sequenced and annotated the first complete genome of a HAB species: Aureococcus anophagefferens. The article, entitled, “Niche of harmful alga Aureococcus anophagefferens revealed through ecogenomics,” will be published online in the February 21 edition of the Proceedings of the National Academy of Sciences.

“Harmful algal blooms are not a new phenomenon, although many people may know them by other names such as red tides or brown tides,” says Dr. Gobler.  “These events can harm humans by causing poisoning of shellfish and can damage marine ecosystems by killing fish and other marine life.”

And the problem is worsening. “The distribution, frequency and intensity of these events have increased across the globe and scientists have been struggling to determine why this is happening,” notes Gobler.

Marine phytoplankton is so tiny—50 of them side by side span only the width of a single hair—that they may seem harmless.  But when billions of Aureococcus anophagefferens, or ”brown tide,”  cells come together, they outcompete other marine phytoplankton in the area, damaging the food chains in marine ecosystems as well as economically impacting the shellfish industry.  Economic losses attributed to this phenomenon over the course of the last decade have been estimated at one billion dollars.

The 56-million base pair Aureococcus genome was sequenced in 2007 by the Department of Energy (DOE)’s Joint Genome Institute from a DNA isolated by Stony Brook University researcher, Dr. Dianna Berry from a culture originating from the shores of Long Island, one of the regions most affected by the microalga since it first appeared 25 years ago on the east coast of the United States.  “Compared to other phytoplankton inhabiting the same estuaries, Aureococcus, which outcompetes them, shows genome-encoded advantages such as the use of organic nutrients, survival under low light conditions, and a large numbers

of enzymes which rely on metals which are abundant in shallow estuaries,” notes Gobler.

For example, this photosynthetic microalga is well-adapted to low light, and can survive for long periods in no-light conditions.  The genomic investigations made by another Stony Brook professors on the project, Dr. Jackie Collier, revealed that Aureococcus had 62 light-harvesting genes whereas its competitors had a couple of dozen of these genes on average.

“I think this paper says it all,” says Don Anderson, Director of the U.S. National Office for Harmful Algal Blooms and a senior scientist at Woods Hole Oceanographic Institution in Falmouth, Massachusetts. “Here’s a species that blooms and for years people have been trying to understand why it blooms, when it blooms, how it is able to do that when there are so many other competing species in the water with it? With this new genomic data you have a new approach. You’re getting answers based on the genes, though you still need other approaches that are more oceanographic and chemical to go along with the inferences drawn from the presence and absence of genes. It’s a great advance. It’s a great resource for our community – the more we learn about Aureococcus, the easier it’s going to be learn about the other HAB species.”

Dr. Gobler’s study also opens the door for future research.  One specific field of study that arose from the data involves nitrogen utilization genes.  “We know as a bloom occurs, the level of organic nitrogen in the estuary are high, but do we see organic nitrogen utilization genes expressed in Aureococcus as a bloom occurs?” questions Dr. Gobler.  “Beyond gene expression, proteomics and looking at proteins synthesized during blooms are also other areas of future research.”

“Aureococcus has contributed to major declines in the Long Island shellfish industry over the past 25 years,” said Dr. Jim Ammerman, Director of New York Sea Grant, “and we have supported a number of Dr. Gobler’s ecological studies of Aureococcus for the past 15. It is particularly gratifying, however, to have provided support to this genomic study because of the clear message that the Aureococcus genome is sending about the specific human impacts contributing to the recent proliferation of this HAB species.”

The study provides a greater understanding of this organism and how the information can be used to protect our waters.  “We now know that this organism is genetically predisposed to exploit certain characteristics of coastal ecosystems,” notes Dr. Gobler.  “But we also know the characteristics are there because of activities of man.  If we continue to increase, for example, organic matter in coastal waters, then it’s going to continue to favor brown tides since it’s genetically predisposed to thrive in these conditions. We believe the same genome-enabled approach used for this study can be applied to other HABs in the future.”

Acknowledgements:  Genome sequencing, annotation, and analysis were conducted by the U.S. Department of Energy Joint Genome Institute is supported by the Office of Science of the U.S. Department of Energy under Contract No. DE-AC02-05CH11231. Efforts were also supported by awards from New York Sea Grant to Stony Brook University, National Oceanic and Atmospheric Administration Center for Sponsored Coastal Ocean Research award #NA09NOS4780206 to Woods Hole Oceanographic Institution, NIH grant GM061603 to Harvard University, and NSF award IOS-0841918 to The University of Tennessee. Assembly and annotations of Aureococcus anophagefferens are available from JGI Genome Portal at http://www.jgi.doe.gov/Aureococcus and were deposited at DDBJ/EMBL/GenBank under the project accessions (ACJI00000000), respectively.