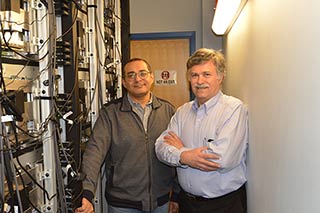 This collaborative research project is based on the theory that the most significant performance and energy bottlenecks in a computer are caused by the storage system and are largely due to the gap between storage device and CPU speeds. For example, storage device speeds are often one million times slower than CPU speeds. Big data and new storage media (such as flash disks) worsen the situation because today’s systems are still optimized for legacy workloads and (magnetic) hard disks. The teams at Stony Brook University, Harvard University, and Harvey Mudd College have shown that large systems are poorly optimized, resulting in waste that increases computing costs, slows scientific progress, and jeopardizes the nation’s energy independence.

“Large computing systems are expanding rapidly to process the ever growing data-set sizes, but they are also consuming more energy at alarming rates, often due to delays in the data storage subsystem. Working with top researchers nationwide, we hope to make one more critical step towards our nation’s energy independence and advancing the U.S. scientific capabilities,” said Zadok.

With developing optimal performance and energy efficiency solutions top-of-mind, during the first phase of this three-year project, the team will examine modern workloads running on a variety of platforms, including individual computers, large compute farms, and a next-generation infrastructure, such as Stony Brook University’s Reality Deck, a massive gigapixel visualization facility.

The findings from the first two efforts will be used to develop new storage architectures that balance performance and energy under different workloads when used with modern devices, such as solid-state drives (SSDs) and phase-change memories. The designs will leverage the team’s work on storage-optimized algorithms, multi-tier storage, and new optimized data structures.

“Working alongside Margo Seltzer at Harvard and Geoff Kuenning at Harvey Mudd to develop solutions to storage architecture challenges is an opportunity to share resources and to collaborate with exceptional faculty, where the whole is greater than the sum of its parts. We are thrilled that the importance of this research is recognized by NSF with a joint grant of one million dollars,” said Arie Kaufman.

Prof. Kaufman is a Distinguished Professor and Chair of the Department of Computer Science, the Director of the Center of Visual Computing (CVC), and the Chief Scientist of the Center of Excellence in Wireless and Information Technology (CEWIT) at Stony Brook University. He joined the faculty in 1985 and was appointed Chair in 1999.  Kaufman is internationally recognized for his contributions to information technology and specifically to visualization and graphics. He is an IEEE Fellow, an ACM Fellow, member of the European Academy of Sciences, received the prestigious IEEE Visualization Career Award, and was inducted into the Long Island Technology Hall of Fame.

Prof. Zadok completed his PhD in Computer Science from Columbia University in 2001. He directs the File Systems and Storage Lab at Stony Brook University’s Department of Computer Science. He is the recipient of the SUNY Chancellor’s Award for Excellence in Teaching in 2008, the NSF Career Award in 2002, two NetApp Faculty awards in 2009 and 2011, and two IBM Faculty awards in 2006 and 2008.