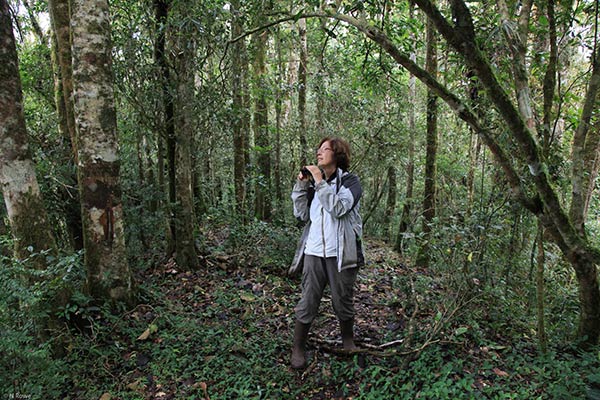 STONY BROOK, NY, February 20, 2014 -With more than 90 per cent of species threatened with extinction, lemurs are the most threatened mammal group on earth, according to a paper published in the Feb. 21 edition of the journal Science, entitled “Averting Lemur Extinctions amid Madagascar’s Political Crisis,” co-authored by Patricia Wright, PhD, the founding director of Centre ValBio and the Institute for the Conservation of Tropical Environments and a Professor of Biological Anthropology at Stony Brook. The article, led by primatologist Dr. Christoph Schwitzer, head of research at Bristol Zoo Gardens and vice-chair for Madagascar of the International Union for Conservation of Nature(IUCN) SSC Primate Specialist Group, was co-authored by 18 lemur conservationists and researchers in addition to Wright.

The Science paper stresses the importance of implementing a new emergency, three-year IUCN lemur action plan – recently published by Schwitzer and other lemur experts from around the world, which outlines a way forward for saving Madagascar’s 101 lemur species, despite profound problems. The action plan contains strategies for 30 different priority sites for lemur conservation and aims to help fundraise for individual projects.

Native to the shrinking and fragmented tropical and subtropical forests of Madagascar, off Africa’s Indian Ocean coast, lemurs are facing grave extinction risks driven by human disturbance of their habitats. Combined with increasing rates of poaching and the loss of funding for environmental programs by most international donors in the wake of the political crisis in Madagascar, challenges to lemur conservation are immense.

“After the Presidential election in December I am optimistic about lemur conservation for the first time in four years,” Wright said. “Political stability has returned to Madagascar. That means that laws will be enforced and Eco tourists will return to Madagascar to see lemurs and help fuel the economy. After four catastrophic years of lawlessness, hunting and exploitation, hopefully we will be able to save the remaining lemurs and expand on protected areas. Working closely with villagers to manage unprotected forested areas and providing them training and creating jobs to protect their lemurs will be a possible strategy with political stability.  Centre ValBio will be working hard to make sure that there are lemurs for everyone to see far into the future.”

“Fact is that if we don’t act now, we risk losing a species of lemur for the first time since our records began,” Schwitzer explains. “Lemurs have important ecological and economic roles and are essential to maintaining Madagascar’s unique forests, through seed dispersal and attracting income through ecotourism. Their loss would likely trigger extinction cascades. The importance of the action plan cannot be overstated.”

Vital steps outlined by Dr. Schwitzer and colleagues include effective management of Madagascar’s protected areas, the creation of more reserves directly managed by local communities, and a long-term research presence in critical lemur sites. Currently Bristol Zoo, alongside other European zoos, manages one of the few long-term research stations for monitoring lemurs in Madagascar’s forests. Working on grassroots projects with local communities and promoting and expanding ecotourism – one of the country’s most important foreign exchange earners – are other important components of the action plan.

Dr. Schwitzer said: “Despite profound threats to lemurs, which have been exacerbated by the five-year political crisis, we believe there is still hope. Past successes demonstrate that collaboration between local communities, non-governmental organizations and researchers can protect imperiled primate species. Madagascar recently held their first post-crisis presidential elections. There are encouraging signs that the new president, former finance minister Hery Rajaonarimampianina, will set the conditions for a return to effective governance and, very importantly, resumption of international aid.”

He added: “We urgently invite all stakeholders to join our efforts to meet the action plan’s goals and to ensure the continued existence of lemurs and the considerable biological, cultural and economic richness they represent. Madagascar – and the world – would undoubtedly be much poorer without them.”

Dr. Russell Mittermeier, President of Conservation International and Chair of the IUCN SSC Primate Specialist Group, co-authored the article in Science and the IUCN lemur action plan.  Mittermeier, a legendary figure in conservation, is an adjunct professor in the Department of Anatomical Sciences at Stony Brook University.

“The actions needed to prevent further lemur extinctions, as outlined in the Lemur Conservation Strategy, are ambitious but attainable,” said Mittermeier. “Lemurs, tortoises, rosewood, and other natural resources in Madagascar have been collateral damage and victims of the political instability that has persisted for nearly five years.  However, with the new democratically-elected government of President Rajaonarimampianina, we have high hopes that this exploitation of natural resources will be curtailed in the near future. Indeed, during a recent meeting with President Rajaonarimampianina, we discussed lemur conservation and ecotourism, the rosewood trade, and the importance of Madagascar’s biodiversity as its most visible and important global brand and key element in long-term human well-being and poverty alleviation. These were all issues about which he was already well-informed. As a result, I am feeling optimistic about Madagascar for the first time since early 2009.”

Of the 101 surviving lemur species, 22 are now classified Critically Endangered, 48 are Endangered, and 20 are Vulnerable on the IUCN Red List, equating to 94 percent of the world’s lemur species for which sufficient data were available to enable their assessment against the Red List criteria.

Early in her career, Wright made history when she discovered the golden bamboo lemur, a species that was then unknown to science and that helped to catalyze the formation of Madagascar’s park systems. A short time later, Wright learned that timber exploiters were logging its rain forest habitat, so she spent months trekking to delimit park boundaries with the forestry service and securing funding to develop Ranomafana National Park (RNP), now a UNESCO World Heritage Site that encompasses the home of 12 lemur species, some of which are listed among the world’s most endangered animals.

During the past 20 years, awareness of Madagascar’s ecosystem has flourished through her research and outreach efforts and Wright’s long-term relationship with the local communities has catalyzed economic opportunities around the park. Tourist visits to the park have increased from zero to more than 30,000 in 2009, and half the park entrance fees have always been returned to the villages for conservation projects. Recently she has spearheaded Centre ValBio, a modern hub for multidisciplinary research, training and public awareness, the first in Madagascar. Wright was a finalist for the 2012 Indianapolis Prize.