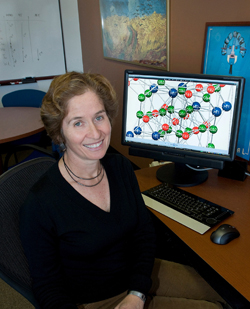 UPTON & STONY BROOK, N.Y., February 18, 2010 — Meigan Aronson, a physicist at the U.S. Department of Energy’s Brookhaven National Laboratory and a professor in the Department of Physics and Astronomy at Stony Brook University, has been selected by the U.S. Department of Defense (DOD) to be one of 11 distinguished scientists and engineers forming the 2010 class of its National Security Science and Engineering Faculty Fellowship program. The fellows were chosen from an initial pool of 800 nominees.


The fellows conduct basic research in core science and engineering disciplines that are expected to underpin future DOD technology development. Aronson’s sponsoring institution, Stony Brook University, will receive $850,000 per year over a five-year period from DOD to fund her research on high-temperature superconductors, materials that conduct electricity without resistance.

“I am pleased that this funding will allow me to work over an extended time on my project to design new superconductors,” Aronson said. “I’m also gratified that I have top-notch scientific resources available at both Brookhaven Lab and Stony Brook University to pursue this research.”

Superconductors are currently used in a range of electronic applications, notably in wireless communications. Replacing existing conventional electrical conductors with superconducting cables would lead to more efficient transmission of electrical power and to lighter weight electrical motors that would operate with practically no loss in power. Superconductors provide unsurpassed sensitivity as detectors in applications such as medical imaging and homeland security. One of the most important steps toward wide-scale adoption of superconducting technologies would be the discovery of new families of materials that are superconducting at room temperature. Then the bulky and energy-intensive cryogenic environments necessary for the current generation of superconductors would no longer be required.

Aronson will use a new method to design high-temperature superconductors, called theory-assisted synthesis. She will work with theoretical and experimental collaborators from Rutgers University and the University of Michigan to determine the electronic behaviors of selected superconducting materials and will use this information to decide which ones might have the most potentially useful properties, and therefore, would be the best to fabricate. By modifying the combination of elements in the superconducting material, it will be possible to predict the compositions of new materials that can be expected to have improved superconducting properties.

Meigan Aronson earned an A.B. in physics from Bryn Mawr College in 1980 and an M.S. and Ph.D., in 1982 and 1988, respectively, from the University of Illinois, Urbana-Champaign. She was a postdoctoral assistant at Los Alamos National Laboratory from 1987 to 1989. In 1990, she became an assistant professor of physics at the University of Michigan, and worked her way through the ranks to become a full professor in 2002.  In 2004 she became the associate dean for natural sciences in the College of Literature, Science, and Arts at the University of Michigan. In 2007, she was jointly appointed as group leader of correlated electron materials in the Condensed Matter Physics and Materials Science Department at Brookhaven Lab and professor in the Department of Physics and Astronomy at Stony Brook University.

One of ten national laboratories overseen and primarily funded by the Office of Science of the U.S. Department of Energy (DOE), Brookhaven National Laboratory conducts research in the physical, biomedical, and environmental sciences, as well as in energy technologies and national security. Brookhaven Lab also builds and operates major scientific facilities available to university, industry, and government researchers. Brookhaven is operated and managed for DOE’s Office of Science by Brookhaven Science Associates, a limited-liability company founded by the Research Foundation of the State University of New York, for and on behalf of Stony Brook University, the largest academic user of Laboratory facilities; and Battelle Memorial Institute, a nonprofit, applied science and technology organization. Visit Brookhaven Lab’s electronic newsroom for links, news archives, graphics, and more (
http://www.bnl/gov/newsroom
), or follow Brookhaven Lab on Twitter (
http://twitter.com/BrookhavenLab
).

Part of the State University of New York system, Stony Brook University encompasses 200 buildings on 1,600 acres. In the 50+ years since its founding, the University has grown tremendously, now with nearly 24,000 students and 2,100 faculty and is recognized as one of the nation’s important centers of learning and scholarship. It is a member of the prestigious Association of American Universities, and ranks among the top 100 national universities in America and among the top 50 public national universities in the country according to the 2008 U.S. News & World Report survey. Considered one of the “flagship” campuses in the SUNY system, Stony Brook University co-manages Brookhaven National Laboratory, joining an elite group of universities, including Berkeley, University of Chicago, Cornell, MIT, and Princeton, that run federal research and development laboratories. SBU is a driving force of the Long Island economy, with an annual economic impact of $4.65 billion, generating nearly 60,000 jobs, and accounts for nearly 4% of all economic activity in Nassau and Suffolk counties, and roughly 7.5 percent of total jobs in Suffolk County. – See more at: http://commcgi.cc.sunysb.edu/cgi-bin/am2/admin.cgi#sthash.rIXYY6No.dpuf