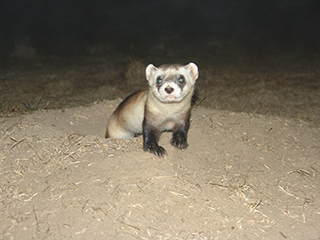 STONY BROOK, NY, February 19, 2014 – The black-footed ferret is one of the most endangered mammals in North America, but new research suggests that these charismatic critters can persist if conservationists think big enough.

Decades of human persecution (e.g., poisoning) of the ferret’s favorite prey, prairie dogs, and severe outbreaks of plague and distemper led to its extinction in the wild in 1987. Since then, thousands of captive-raised ferrets have been released across North America, and at least four wild populations have been successfully reestablished. However, a new factor threatens to undermine these hard-fought conservation gains: the continued eastward spread of the exotic bacterial disease plague, which is a quick and efficient killer of prairie dogs, and is caused by the same microbe that is implicated in the Black Death pandemics of the Middle Ages.

The study is a collaboration among scientists from six institutions, led by Dr. Kevin Shoemaker and Prof. Resit Akçakaya from Stony Brook University in New York. It is part of a larger Research Coordination Network project supported by the U.S. National Science Foundation, and led jointly by the Chicago Zoological Society and Stony Brook University.

“An alarming finding of our study is that there are few prairie dog complexes left that are large enough to support black-footed ferret populations given the severe threats they face – especially plague” said Dr. Shoemaker, a post-doctoral scientist at Stony Brook University.

Another author of the study, Dr. Travis Livieri, a ferret expert and Executive Director of Prairie Wildlife Research in Wellington, CO, emphasized that “the new results underscore the importance of working with many constituents to conserve large prairie dog landscapes and finding new tools to combat plague.” Wildlife experts are already experimenting with vaccination programs.

According to Dr. Akçakaya, “one application of the new models developed in this study would be to determine exactly how and where to apply pesticides and vaccines to reduce the spread of plague.”