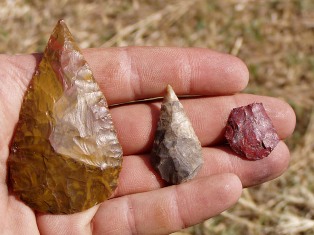 “Stone points dating to at least 104,000 years ago from Omo Kibish, Ethiopia. These points, shaped by pressure-flaking and likely used as projectile points are more than 65,000 years older than the oldest similar artifacts from the European Upper Paleolithic Period. The Omo Kibish toolmakers showed equal skill at making similar points out of very different kinds of stone. (Photo courtesy of John Shea, Stony Brook University)

STONY BROOK, N.Y
., February 17, 2011— In a paper recently published in Current Anthropology, SBU Professor John Shea disproves the myth that the earliest humans were significantly different from us. The idea that human evolution follows a progressive trajectory is one of the most deeply-entrenched assumptions about Homo sapiens evolution. In fact, archaeologists have long believed that modern human behaviors emerged tens of thousands of years after our species first evolved. And while scientists disagreed over whether the process was gradual or quick, they have agreed that Homo sapiens once lived who were very different from us.

“Archaeologists have been focusing on the wrong measurement of early human behavior,” says John Shea, Ph.D, professor of Anthropology at SBU and a Research Associate with the Turkana Basin Institute in Kenya. “The search has been for evidence of ‘behavioral modernity,’ a quality supposedly unique to Homo sapiens, when archaeologists ought to have been investigating ‘behavioral variability,’ a quantitative dimension to the behavior of all living things.”

Early humans were not “behaviorally modern,” meaning they did not collect difficult-to-procure foods, nor did they use complex technologies like traps and nets. But, according to Shea, there is now evidence that some of the behaviors associated with modern humans—specifically our capacity for wide behavioral variability, —did occur among early humans.

The European Upper Paleolithic archaeological record has long been the standard against which the behavior of earlier and non-European humans is compared. During the Upper Paleolithic (45,000-12,000 years ago), Homo sapiens fossils first appeared, together with complex tool technology, carved bone tools, complex projectile weapons, advanced techniques for using fire, cave art, beads and other personal adornments. Similar behaviors are either universal or very nearly so among recent humans, and, thus, archaeologists cite evidence for these behaviors as evidence of human behavioral modernity.

Yet, the oldest Homo sapiens fossils occur between 100,000-200,000 years ago in Africa and southern Asia and in contexts lacking clear and consistent evidence for such behavioral modernity. For decades anthropologists contrasted these earlier “archaic” African and Asian humans with their “behaviorally-modern” Upper Paleolithic counterparts, explaining the differences between them in terms of a single “Human Revolution” that fundamentally changed human biology and behavior. Archaeologists disagree about the causes, timing, pace, and characteristics of this revolution, but there is a consensus that the behavior of the earliest Homo sapiens was significantly different than that of more-recent “modern” humans.

The study, entitled “Homo sapiens Is as Homo sapiens Was: Behavioral Variability vs. ‘Behavioral Modernity’ in Paleolithic Archaeology,” has important implications for archaeological research on human origins. “Comparing the behavior of our most ancient ancestors to Upper Paleolithic Europeans holistically and ranking them in terms of their “behavioral modernity” is a waste of time,” argues Shea. “There are no such things as modern humans, just Homo sapiens populations with the capacity for a wide range of behavioral variability. Whether this range is significantly different from that of earlier and other hominin species remains to be discovered, but the best way to advance our understanding of human behavior is by researching the sources of behavioral variability.”

Part of the State University of New York system, Stony Brook University encompasses 200 buildings on 1,450 acres. In the 53 years since its founding, the University has grown tremendously, now with nearly 25,000 students and 2,200 faculty, and is recognized as one of the nation’s important centers of learning and scholarship. It is a member of the prestigious Association of American Universities, and ranks among the top 100 national universities in America and among the top 50 public national universities in the country according to the 2010 U.S. News & World Report survey. Stony Brook University co-manages Brookhaven National Laboratory, as one of an elite group of universities, including Berkeley, University of Chicago, Cornell, MIT, and Princeton that run federal research and development laboratories. SBU is a driving force of the Long Island economy, with an annual economic impact of $4.65 billion, generating nearly 60,000 jobs, and accounts for nearly 4% of all economic activity in Nassau and Suffolk counties, and roughly 7.5 percent of total jobs in Suffolk County. – See more at: http://commcgi.cc.sunysb.edu/cgi-bin/am2/admin.cgi#sthash.86nZo6Ys.dpuf