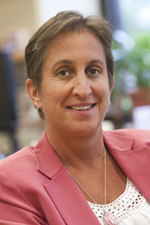 As Senior Vice President for Administration, Chernow will oversee a consolidated administrative office at Stony Brook, which includes Facilities and Services, Finance and Human Resource Services with direct responsibility for all administrative, business and facilities operations including design and construction activity.  Additionally, she will continue to oversee the University Police Department, Environmental Health and Safety, and Parking and Transportation. She will also Chair the Project 50 Forward Operational Excellence Program Management Office, to ensure successful outcomes of various initiatives while tracking budget savings and striving to keep the campus community well informed.

“Barbara is a proven leader,” said President Stanley, referring to Chernow’s numerous accomplishments during her 14 years of service at Stony Brook. “Since joining Stony Brook in 1998, her management skills have resulted in improved services and reduced costs and it will be beneficial, both in terms of internal and external interactions, for her to serve as the single point of contact between Finance, Human Resources and Facilities.”

During her more than 30-year career, Chernow has held a variety of senior management positions in facilities and operations including serving as the Vice President of Administration for the New York City School Construction Authority. In her role as Vice President for Facilities and Services at Stony Brook, she played an integral role in the development of a new Facilities Master Plan designed to further the University’s academic, research, and community-building goals. Under her leadership, the department improved campus buildings, grounds and infrastructure while enhancing safety and fostering a supportive environment for the campus community. Some of the department’s major accomplishments during her tenure include programs that have received third party recognition for saving energy, reducing pollution and minimizing the University’s impact on the natural environment.

Since October 2007, Chernow has served as President of the University’s Faculty Student Association, the not-for-profit organization that provides dining, retail and other auxiliary services to the Stony Brook campus community. She is a graduate of Brown University and a past recipient of the Executive Leadership Award presented by the National Association of Professional Women in Construction.