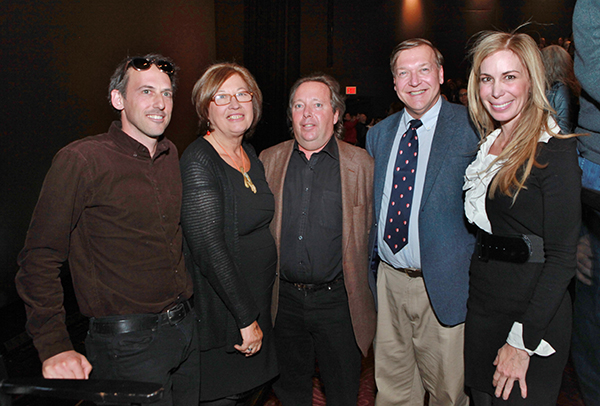 Friends of Stony Brook flocked to the AMC Lowes Lincoln Square 13 movie theater in Manhattan on February 1 for an invitation-only sneak preview of IMAX Island of Lemurs Madagascar 3D.

STONY BROOK, NY, February 12, 2014 — Narrated by Academy Award winner Morgan Freeman, the documentary IMAX Island of Lemurs Madagascar features Stony Brook Professor Patricia Wright, who has devoted 27 years to the endangered lemurs of Madagascar. In addition to protecting several lemur species from extinction and credited with discovering new ones, she was instrumental in helping protect their habitats by working with the Madagascar government and Malagasy people to conserve 106,000 acres of rainforest.

Wright was thrilled by the overwhelming support and impact philanthropy has and will continue to have on her research.  “Thanks to private philanthropy received in the past few years, we’ve been able to open a new research center and expand our research as never before,” said Wright. “It’s so gratifying to know that the work we began 27 years ago will continue for generations to come.”

Addressing the audience, President Stanley expressed his support for the University’s global mission, and in Centre Val Bio in particular.

“It’s one of the world’s top biodiversity hotspots with an unsurpassed number of species found nowhere else on earth,” he said. “The research conducted at Centre Val Bio contributes to understanding the ecology of tropical rainforests in Madagascar, with implications for rainforest conservation throughout the world.”

Ticket sales from the nearly 600 attendees and a matching gift announced by long-time Stony Brook University friend Andrew Sabin at the event will be donated to Pat Wright’s research station Centre Val Bio. “Having been to Madagascar twice, I deeply believe in the important work of the Centre ValBio, “said Sabin. “We have a small window in which to make a difference there and it is a privilege to have a role in conserving Madagascar’s unique and important biodiversity.”

Richard Gelfond (’76) underwrote the sold-out event, ensuring that all proceeds– totaling more than $30,000—will be used to protect the lemurs and their rainforest habitats.

“Pat Wright’s work in Madagascar is not only vital to Madagascar, but has implications and lessons for the rest of the world,” said Gelfond, who is also Chair of the Stony Brook Foundation. “Spreading the word about what she’s accomplished was the driving force behind this recent IMAX film.”

A presentation of Warner Bros. Pictures and IMAX Entertainment, Island of Lemurs: Madagascar will be released in select IMAX and IMAX3D theaters starting April 4, 2014.