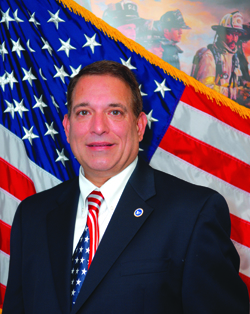 STONY BROOK, NY, February 12, 2010 – Frank C. Trotta, II, a successful publisher, entrepreneur and lifelong resident of the Village of Bellport, has been appointed to the Stony Brook University Council, a board appointed to serve as an oversight and advisory body to the campus and to Stony Brook’s president and senior officers. In accordance with New York State Education Law, the Council comprises ten members; nine of whom are appointed to seven-year terms by the Governor of the State of New York, and one student member elected in alternating years from among the campus’ undergraduate and graduate students.


“I am honored to be serving SUNY Stony Brook and bringing my business, community and academic background to this nationally recognized institution,” said Mr. Trotta. “The impact of Stony Brook on our region will become even greater over the next decade as Stony Brook becomes a major economic engine for Long Island during these challenging times. I look forward to being part of that success.”

Deeply committed to public service, Mr. Trotta began his career in public office in 1973 when he served for six years as a village trustee in the Village of Bellport. In 1983 he was elected to the office of mayor, which he held for 25 years before retiring in 2008 as Bellport’s longest serving Mayor. He served as Chairman of The Board of Zoning Appeals for the Town of Brookhaven from 1997 to 2003 and as Director of the Suffolk County Office for the Aging from 1986 to 1998. Most recently he served a five-year term as a Trustee of Suffolk County Community College. Additionally he was an instructor at Briarcliff College in Patchogue and a mentor at SUNY Empire State College in Stony Brook.

From 1989 to the present Mr. Trotta has been the founder, owner, and CEO of several businesses including Prime Time Travel Club, one of the largest tour operators on Long Island. Trotta Cruise & Vacation is a full-service travel agency and Cruisetoanywhere.com. is an online cruise booking site.

Mr. Trotta also publishes two newspapers – 50 Plus LifeStyles and Fire News. 50 Plus LifeStyles is a regional newspaper designed for boomers and beyond in Nassau and Suffolk and the five boroughs of New York City.  Fire News covers issues of concern to fire and EMS departments throughout Long Island. Two other editions serve the states of New York and New Jersey. Fire News is recognized as one of the most respected Fire Rescue and EMS publications in the United States.

“Frank’s experience as a public servant, a successful businessman, and a newspaper publisher brings a breadth of experience that contributes many important perspectives to the Council,” said Samuel L. Stanley, Jr., MD., President of Stony Brook University. “We value his insight and are grateful that he takes such a high level of interest in the future of Stony Brook University.”

Mr. Trotta has been involved in local and community activities throughout his life and has served on many boards, including the Alzheimer’s Association, Long Island Chapter, Foster Grandparents of Suffolk County, Suffolk County Red Cross, Community Mediation Center, and Ms. New York Senior America Pageant. He is past president of the North American Mature Publications Association and the Suffolk County Village Officials Association. He has also been on the advisory boards of Brookhaven Memorial Hospital and the Suffolk County Office for the Aging. He is an honorary member of the Bellport Fire Department and the South Country Ambulance Co.

A graduate of Valley Forge Military Academy, Mr. Trotta received a B.A. in Business Administration and Political Science from Long Island University in 1975 and an M.P.A. in 1985. He and his wife Marie have two grown children, Christina and Frank III.