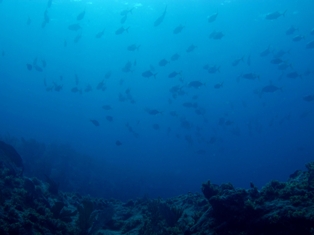 John J. Wiens studied the relative paucity of species diversity in the oceans

STONY BROOK, NY, February 10, 2012 – A Stony Brook University researcher has found that, contrary to popular belief, there are not plenty of fish in the sea.

In an article entitled “ Why are there so few fish in the sea?,” published online this week in the Proceedings of the Royal Society B, John J. Wiens, PhD, an Associate Professor in the Department of Ecology and Evolution at Stony Brook University, addresses why the oceans contain only 15-25 percent of all of Earth’s species even though they cover about 70 percent of Earth’s surface.

Dr. Wiens and student Greta Carrete Vega examined the evolutionary and ecological causes of the low species numbers of marine environments by studying the biodiversity of ray-finned fish, the most species rich group of marine vertebrates, containing 96 percent of all fish species. They performed analyses using evolutionary trees based on molecular data and fossils, and using a large database on the habitats of nearly all living fish species.

The study found a surprising difference in diversity between freshwater and saltwater habitats.

“There are more fish species in freshwater than in saltwater habitats, despite the much greater area and volume of the oceans,” he said, noting that freshwater environments occupy only about 2 percent of the Earth’s surface. “More remarkably, our results suggest that most marine fish alive today are descended from freshwater ancestors (even though fish and animals in general first evolved in the oceans).”

The authors hypothesized that extinctions in marine habitats, hundreds of millions of years ago, may help explain the low present-day diversity of marine fish.

“Our results suggest that ancient extinctions in the marine environment may have wiped out the earliest ray-finned fishes living in the oceans, that the oceans were then recolonized from freshwater habitats, and that most marine fish species living today are descended from that recolonization (leaving less time for biodiversity to build up in the oceans),” he said. “This pattern of ancient extinction and more recent recolonization may help explain why the oceans are now so species-poor, even for fish.