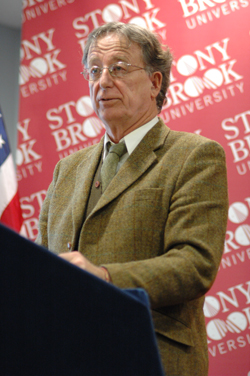 
The Wolf Prize in mathematics, considered an equivalent of the Nobel Prize and worth $100,000, will be formally awarded in May at the Israeli Knesset by President Shimon Peres and Education Minister and Wolf Foundation Council Chairman Gideon Sa’ar. Wolf prizes are also awarded in agriculture, chemistry, medicine, physics and the arts.

“When I looked at list of people who won the prize, I was honored. They were all my heroes,” said Dr. Sullivan. “This was impressive.”

Dr. Sullivan said he received the call about the prize on Sunday as he was rushing to take his seven-year-old daughter to swimming lessons. “I said ‘Thanks very much but I have to go now,’” he laughed. “I didn’t even find out who the co-winner was or when I’m supposed to be there.”

Dr. Sullivan, an internationally renowned mathematician who also holds the Albert Einstein Chair in Science at the City University of New York Graduate Center, will share the 2010 Wolf Prize in Mathematics with another American, Prof. Shing-Tung Yau of Harvard University, who was cited  for his work in geometric analysis that has had a profound and dramatic impact on many areas of geometry and physics.

“We are very happy and impressed because this probably is one of the most respected prizes in mathematics and only the very best mathematicians in the world receive it” said Leon A. Takhtajan, Ph.D., Professor and Chair of the Department of Mathematics. “The choice is outstanding. It’s a honor and a distinction for the Mathematics Department. There is no such thing as a Nobel Prize in mathematics but there are two-three prizes that are the equivalent. The Wolf Prize is one of them.”

Dr. Sullivan was nominated for the prize by Professor Mikhail Lyubich, Ph.D., Director of Stony Brook’s Institute for Mathematical Sciences. According to the nomination letter, “Dennis Sullivan has made fundamental contributions to Topology and Dynamics, along with outstanding results in many other fields of mathematics; Geometry, Kleinian groups, Analysis, Number theory…”

Since 1978 the Wolf Prize has been awarded 27 times to 253 scientists and artists from 23 countries, for “achievements in the interest of mankind and friendly relations among peoples, irrespective of nationality, race, color, religion, sex or political view,” according to the Wolf Foundation. The Foundation was established by the late German-born inventor, diplomat and philanthropist Dr. Ricardo Wolf, who served as Cuban ambassador to Israel.

Dr. Sullivan has made fundamental contributions to many branches of mathematics, including homotopy theory, dynamical systems, Kleinian groups, and low dimensional topology. The scope of his ideas and influence has been truly remarkable.

In 2006 Dr. Sullivan, received the AMS Leroy P. Steele Prize for Lifetime Achievement. Presented annually by the American Mathematical Society, the Steele Prize is one of the highest distinctions in mathematics. “Beyond the specific theories he has developed and the problems he has solved … his uniform vision of mathematics permeates his work and has inspired those around him,” according to the citation for that prize.

President George W. Bush awarded Dr. Sullivan the National Medal of Science in 2004 “For his achievements in mathematics, including solving some of the most difficult problems and creating entirely new areas of activity, and for uncovering striking, unexpected connections between seemingly unrelated fields.”

Dr. Sullivan is also the recipient of the 1971 Oswald Veblen Prize in Geometry, the 1981 Prix Élie Cartan of the French Academy of Sciences and the King Faisal International Prize for Science in 1994.

Born in 1941 in Port Huron, Michigan, Dr. Sullivan received his doctorate from Princeton University in 1966. He held positions at Massachusetts Institute of Technology, University of California at Berkeley and Princeton University was a member of the Institut des Hautes Etudes Scientifique outside Paris from 1973-1996. He was named to the CUNY chair in 1981 and has been a member of the Stony Brook faculty since 1995.

For a Jerusalem Post article on all of the 2010 Wolf Prize winners, go to http://www.jpost.com/Israel/Article.aspx?id=167531

For more information on the Wolf Prize go to http://www.wolffund.org.il/main.asp

Part of the State University of New York system, Stony Brook University encompasses 200 buildings on 1,600 acres. In the 50+ years since its founding, the University has grown tremendously, now with nearly 24,000 students and 2,100 faculty and is recognized as one of the nation’s important centers of learning and scholarship. It is a member of the prestigious Association of American Universities, and ranks among the top 100 national universities in America and among the top 50 public national universities in the country according to the 2008 U.S. News & World Report survey. Considered one of the “flagship” campuses in the SUNY system, Stony Brook University co-manages Brookhaven National Laboratory , joining an elite group of universities, including Berkeley, University of Chicago, Cornell, MIT, and Princeton, that run federal research and development laboratories. SBU is a driving force of the Long Island economy, with an annual economic impact of $4.65 billion, generating nearly 60,000 jobs, and accounts for nearly 4% of all economic activity in Nassau and Suffolk counties, and roughly 7.5 percent of total jobs in Suffolk County.