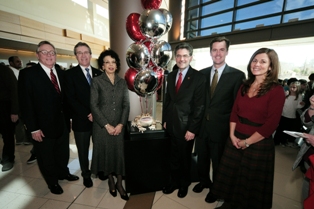 STONY BROOK, N.Y., February 9, 2010 – A life-sized reconstruction of the “devil frog,” the largest frog known to ever exist; a cast of the complete skeleton of a small meat-eating dinosaur named after Mark Knopfler, the lead

singer from the rock band Dire Straits; a skeleton and life-sized reconstruction of a rare, 2.5 foot long pug-nosed vegetarian crocodile; and a pristinely preserved skull of a large dinosaur predator still partially entombed in sandstone are among the 65 million year old fossils from Madagascar that were publicly unveiled for the first time at Stony Brook University on Tuesday, February 9, 2010.

In addition to bringing a healthy, humanistic and interesting form of distraction to visitors and patients at the hospital, the exhibit also serves to heighten awareness of the Madagascar Ankizy Fund (MAF) – an organization founded by Dr. Krause that finances the construction of schools, water sources and health clinics in remote areas of that African island. The addition of health clinics and schools in more remote parts of the island is imperative; currently, Madagascar is one of the poorest countries in the world, with over half of its population surviving on less than $1 a day.  The children in most rural areas cannot read or write and have never been seen by a doctor or dentist; the island nation’s rural populations have among the highest death rates for children under five in the world.

Beelzebufo ampinga: One of the most exciting specimens on display will be a reconstruction of the largest frog ever know to exist. The mammoth-sized ancient frog, scientifically named Beelzebufo was over 16-inches long (not including the legs) and weighed an astounding 10-pounds.  The massive size, girth, appearance, and predatory nature of the frog prompted its discoverers to call it the “frog from hell.” They derived the genus name from the Greek word for devil (Beelzebub) and the Latin word for toad (bufo). The species name, dubbed “ampinga,” means “shield.” The discovery of Beelzebufo was hailed by National Geographic as the second most significant fossil discovery of 2008.

Simosuchus clarki (three pieces): Simosuchus clarki is one of the most bizarre crocodiles to have ever lived. In contrast to most crocodiles, this small 2.5 foot, pug-nosed crocodile had a tall, rounded skull, eyes that faced toward the side, an extremely blunt snout, and leaf-shaped, multi-cusped teeth, suggesting it may have been a plant-eater – an attribute very unique for a crocodile. Simosuchus clarki was built like a tank; complete with armor for protection against its many predators: dinosaurs and larger species of crocodiles. Its tank-like construction, the positioning of its legs, as well as its eyes (facing to the side rather than toward the sky), and its very short tail indicate that it lived on land rather than in water.

This fossil, measuring about six feet in length, was a small predatory theropod dinosaur. With its compact body, long neck, and long arms, Masiakasaurus resembled the well-known dinosaurian carnivore Velociraptor, of Jurassic Park fame.  Strangely, the skull of Masiakasaurus had teeth in the front of its jaws that project directly forward, an adaptation for stabbing prey.

Majungasaurus crenatissimus (two pieces): At roughly 21 feet long, this dinosaur was the top predator on the island of Madagascar 65 million years ago. Skulls found in 1996 and 2005 by Stony Brook paleontologists are among the best preserved and most complete dinosaur skulls ever found. Majungasaurus was a very unusual theropod. It had a short snout, a thick skull roof, and a horn-like bump protruding from the top of its skull. The jaws were equipped with sharp, knife-like teeth designed to slice through flesh. The body of Majungasaurus was also unusual in that it had very short, powerful hind legs but extremely reduced front legs.