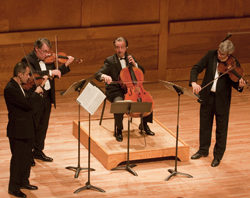 
Named “America’s greatest quartet” by Time Magazine, the Emerson has been Stony Brook’s resident ensemble since 2002. Its members, all artists-in-residence at Stony Brook, teach master classes together and individually. In addition to their performances worldwide, the members also perform solo and have taught classes at institutions throughout the world. The quartet consists of violinists Eugene Drucker and Philip Setzer; Lawrence Dutton, viola/alto; and David Finckel, cello.

Mr. Setzer said he didn’t expect the quartet to be nominated this time because he was unsure about how many people knew about the recording.

“When we get nominated it’s always a great moment because you just don’t know. You try your best to make a great recording, but how people respond to it, you just never know. What’s great about winning a GRAMMY is that you are being nominated and voted for by your colleagues, by people who are in the business, mostly in classical, people who really do know what you are doing. That’s what really struck me this time. They really listened carefully to what we’re doing and really thought enough about it to vote for us. That was really moving for me this time.”

Being at Stony Brook has allowed the quartet to represent the Music Department worldwide,  Mr. Setzer said. “We feel it’s a great honor to represent Stony Brook. We think it’s a special place and the people involved, whether students, faculty, administration or the general public, they all appreciate what a jewel this is at the university here. It’s a very, very strong music department and very highly respected around the world and it if we can help to be a part of that and help spread word, that’s a great honor for us.”

“It a very significant honor,” said Dr. Judith Lochhead, professor of music history and theory and chair of the Music Department at Stony Brook. “The Emerson String Quartet is continuing its excellence and we’re really proud of them. It’s a wonderful legacy that they’re leaving.”

“I was thrilled and so proud when Emerson String Quartet violinist Phil Setzer texted me Sunday night with the words ‘WE WON’ from the GRAMMY Awards in LA,” said Alan Inkles, Director of the Staller Center for the Arts. “Phil, along with his three comrades, Larry, Gene and David, are extremely special individuals who give so much to our students, faculty, staff and greater community at Stony Brook. We are so honored and tremendously fortunate to have these master musicians breathing life into music through their concerts, master classes, workshops and their training of our fine music students at Stony Brook.

The ensemble’s first GRAMMY came in 1989. Over the past three decades, the quartet’s other honors have included more than 30 acclaimed recordings produced with Deutsche Grammophon since 1987, three Gramophone Magazine Awards, the coveted Avery Fisher Prize, and cycles of the complete Beethoven, Bartók, and Shostakovich string quartets in the world’s musical capitals, from New York to London to Vienna.

The quartet’s next recording is released in conjunction with a May 2010 three-concert series entitled “Adventures in Bohemia” in the recently-renovated Alice Tully Hall at New York’s Lincoln Center. The correlated 3-CD set for Deutsche Grammophon of Dvořák’s late quartets, Cypresses and the viola quintet will be released in 2010.

The recording industry’s most prestigious award, the GRAMMY, is presented annually by The Recording Academy. A GRAMMY is awarded by The Recording Academy’s voting membership to honor excellence in the recording arts and sciences. It is truly a peer honor, awarded by and to artists and technical professionals for artistic or technical achievement, not sales or chart positions (GRAMMY Awards Process). The annual GRAMMY Awards presentation brings together thousands of creative and technical professionals in the recording industry from all over the world.

To view a performance by the Emerson String Quartet click here:
http://www.youtube.com/watch?v=AGecTrhNzG4
– See more at: http://commcgi.cc.sunysb.edu/cgi-bin/am2/admin.cgi#sthash.MPGhdCWH.dpuf