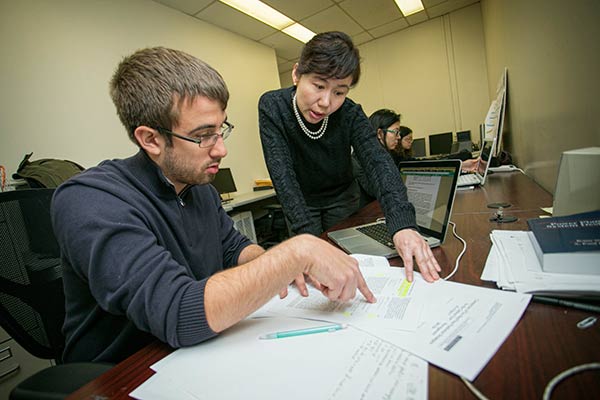 STONY BROOK, New York, January 30, 2014— Qing (Cindy) Chang, Assistant Professor in the Department of Mechanical Engineering in the College of Engineering and Applied Sciences at Stony Brook University, has been selected to receive a 2014 Early Career Award from the NSF’s Sensors and Sensing Systems Program in the amount of $400,000.

The five-year award entitled “CAREER: Collaborative Modeling for Distributed Sensing and Real-Time Intelligent Control to Improve Battery Manufacturing, Productivity and Efficiency,” was made to Chang to direct a study focusing on the creation of a unique technology that can improve productivity, energy efficiency and save costs in the manufacturing process of batteries; specifically how to utilize the full potential of distributed sensor networks to improve system responsiveness, productivity and efficiency during manufacturing of batteries.

“I’m very excited about receiving this award and to have the importance of
our work recognized,” said Prof. Chang. “This results of the project can

mean a boost in the competitiveness of U.S. industries and in the national
economy.”

“Dr. Chang is to be congratulated on being selected to receive one of the most significant honors that is awarded to a young scholar,” said Samuel L. Stanley, Jr., MD, President of Stony Brook University. “This funding provides great opportunities for all involved, and is a fantastic opportunity for Dr. Chang to advance her research and the development of a much needed approach to the challenges facing the advancement of alternative energy today.”

Prof. Chang joined Stony Brook University in September 2011. She received her Ph.D. in mechanical engineering from The University of Michigan in 2006. Before joining Stony Brook she worked in General Motors Research & Development Center, where she won General Motors Boss Kettering Awards in 2005, 2006 and 2008 respectively and The Charles L. McCuen Special Achievement Awards in 2005, 2006 and 2008 respectively, for her research works in improving production efficiency and quality. She has received three US patents in the area of production system and control. She serves as a frequent reviewer for several journals and many conferences and has authored more than 30 refereed journal articles and conference papers. She has served on numerous international/domestic conference/symposium organizing committees, chairmanships, and technical paper review panels for IEEE, ASME, SAE, and SME etc. She was the Technical Chair and Symposium Organizer of ASME MSEC “green energy product” (2012-2014). She lives in Melville.