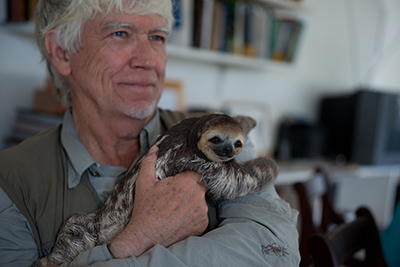 STONY BROOK, NY, January 30, 2014 – Three renowned conservationists on the Stony Brook University faculty, Russell A. Mittermeier, Ph.D., Carl Safina, Ph.D., and Patricia C. Wright, Ph.D., have advanced as finalists for the 2014 Indianapolis Prize, the world’s leading award for animal conservation. Selected from a group of 39 nominees, they are among six finalists in the running to receive an unrestricted $250,000 cash award and the Lilly Medal, and original work of art that signifies the winner’s contributions to saving some of the world’s most threatened animals. Five other finalists will each receive $10,000. The other finalists include Joel Berger, Ph.D., Gerardo Ceballos, Ph.D. and Carl Jones, Ph.D.

“I applaud the finalists for their commitment and perseverance in protecting the world’s most endangered species,” said Jane Alexander, honorary co-chair of the 2014 Indianapolis Prize and 2012 Global Wildlife Ambassador Award winner. “These heroes create successful action plans that other conservationists can model. Our planet is a better place because of their efforts and we are thrilled to tell their stories through the Indianapolis Prize.”

The nominees’ work spans the globe and represents a broad range of species including chimpanzees, snow leopards, sea turtles, giant pandas, bats, swans and many more. An international Nominating Committee composed of renowned professional conservationists and local representatives reviews all nominations and selects six finalists, who will be revealed in the spring of 2014. The Prize Jury will then determine the winner, who will be announced in mid-2014 and honored at the next Indianapolis Prize Gala presented by Cummins Inc., to be held Sept. 27, 2014, in Indianapolis.

About the finalists with faculty appointments to Stony Brook University:

·       Russell A. Mittermeier, Ph.D., a legendary figure in conservation, is president of Conservation International and an adjunct professor in the Department of Anatomical Sciences at Stony Brook University. He has been nominated for his: efforts to understand and educate others about the worldwide threats to biodiversity; global efforts to conserve primates; and, work to create new protected areas in some of the world’s highest priority hotspots. He was an Indianapolis Prize finalist in 2012, and previously nominated in 2008.

During the 1970s and 1980s, Mittermeier was instrumental in putting the Atlantic forest region of Brazil, one of the world’s highest priority hotspots, on the global conservation agenda, using the lion tamarins (very small monkeys) and muriquis (wooly spider monkeys) as flagship species, and he has been a major proponent for conservation in Madagascar for the past quarter century, using the unique lemur fauna of that country as a symbol.  In addition, he works on reptiles; turtles in particular, and has focused a lot of attention on the Guiana Shield region of South America, especially the “borderlands” between Suriname, Guyana, French Guiana and extreme northern Brazilian Amazonia, the most pristine rain forest on Earth, and has helped to create millions of hectares of new parks and reserves. He recently produced the primate volume of the “Handbook of Mammals,” a 900 page book that covers all primates and for the first time illustrates every known species and subspecies, illustrated by Dr. Stephen Nash, a research associate in the department of anatomical sciences at Stony Brook University.

·       Carl Safina, Ph.D., known as the “voice of ocean conservation,” is an accomplished author and scientist who has been sounding the alarm for the preservation of marine animals and the oceans that house them. In 2003, he founded Blue Ocean Institute to bring science, art and literature together to inspire a closer bond with nature, especially the sea. Safina was a finalist for the Indianapolis Prize in 2010 and a three-time nominee, 2008, 2010 and 2012. Dr. Safina is a research professor in the School of Marine and Atmospheric Sciences and a visiting professor and board member in the Alan Alda Center for Communicating Science at Stony Brook University.

In 2013, Safina served as lead scientist on the Gyre Expedition. The expedition, with a team of scientists, artists and educators, traveled 450 nautical miles in remote and beautiful southwest Alaska to study the global marine debris crisis. A Gyre art and science exhibition will premiere in 2014 at the Anchorage Museum, followed by a national tour sponsored by the Smithsonian. National Geographic has just released a Gyre Expedition Documentary.

In 2012, ten episodes of his show “Saving the Ocean with Carl Safina” aired nationwide on PBS. Safina’s latest books were published in 2011: “The View from Lazy Point; A Natural Year in an Unnatural World,” which explores the relationship between nature and human dignity, and “A Sea in Flames,” which explores the decisions and lessons from the 2010 Deepwater Horizon oil blowout. Safina has led campaigns to ban high-seas driftnets, rewrite and overhaul U.S. federal fisheries law, apply international agreements to help restore depleted populations of tunas, swordfish, and sharks, and helped achieve passage of a United Nations global fisheries treaty.

·       Patricia Wright, Ph.D., the founding director of Centre ValBio and the Institute for the Conservation of Tropical Environments and a Professor of Biological Anthropology at Stony Brook, has been recognized for her tireless work with lemurs in Madagascar using science-based conservation. Early in her career, Wright made history when she discovered the golden bamboo lemur, a species that was then unknown to science and that helped to catalyze the formation of Madagascar’s park systems. A short time later, Wright learned that timber exploiters were logging its rain forest habitat, so she spent months trekking to delimit park boundaries with the forestry service and securing funding to develop Ranomafana National Park (RNP), now a UNESCO World Heritage Site that encompasses the home of 12 lemur species, some of which are listed among the world’s most endangered animals.

During the past 20 years, awareness of Madagascar’s ecosystem has flourished through her research and outreach efforts and Wright’s long-term relationship with the local communities has catalyzed economic opportunities around the park. Tourist visits to the park have increased from zero to more than 30,000 in 2010, and half the park entrance fees have always been returned to the villages for conservation projects. Recently she has spearheaded Centre ValBio, a modern hub for multidisciplinary research, training and public awareness, the first in Madagascar. Wright was a finalist for the 2012 Indianapolis Prize.

“Our finalists are among the most important wildlife conservationists working in the field today,” said Michael Crowther, president and CEO of the Indianapolis Zoo, which initiated the Indianapolis Prize as part of its core mission. “They are achieving real victories in saving animal species, creating hope and making the world a better place, and we’re pleased that they are finalists for the world’s leading award for animal conservation.”

The Indianapolis Prize was first awarded in 2006 to Dr. George Archibald, the co-founder of the International Crane Foundation. The 2008 winner was George Schaller, Ph.D., senior conservationist for the Wildlife Conservation Society and an icon in field conservation around the world. In 2010, the Indianapolis Prize was awarded to Iain Douglas-Hamilton, Ph.D., founder of Save the Elephants, who pioneered research in elephant social behavior and has led the way in fighting poaching of African elephants. Steven Amstrup, Ph.D., of Polar Bears International, received the 2012 Indianapolis Prize for his work promoting the cause of the world’s largest land carnivore.

was initiated by the

as a significant component of its mission to empower people and communities, both locally and globally, to advance animal conservation. This biennial award brings the world’s attention to the cause of animal conservation and the brave, talented and dedicated men and women who spent their lives saving the Earth’s endangered animal species. The Indianapolis Prize has received support from the Eli Lilly and Company Foundation since its inception in 2006.