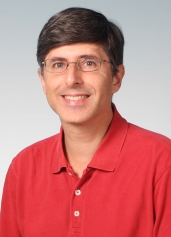 was a bit more excited than most people about today’s announcement about Apple’s new iPad tablet computer, it was understandable. He’s been waiting for it for 22 years.

Dr. Skiena was a 27-year-old Ph.D. student at the University of Illinois in 1988 when he and a team from the college won a national competition sponsored by Apple to design a computer for the year 2000. Their winning entry – a tablet computer.

“We thought a lot about where was technology was going and what it was people would want computers to do. What technologies would develop and how would they converge,” said Dr. Skiena, a Distinguished Teaching Professor who has taught at Stony Brook for 22 years. “We decided that these tablet computers would be a good thing. By the year 2000, you would have a screen you could write on. It would be touch sensitive to extent that you could write on it or type on it. We had a vision that this was going to communicate with different electronic devices around it using what we called an ‘infrared bar’, but which today would be something between Bluetooth and Wifi. We thought people might have cameras and GPS on these machines.”

The University of Illinois team of five Ph.D. students and two faculty advisors had spent six months debating, dreaming and designing a computer that combined emerging technologies with practical applications. They were one of five teams selected for the finals, and on January 28, 1988 they were flown out to Apple headquarters in Cupertino, California to demonstrate their computer before a panel of judges that included Apple co-founder Stephen Wozniak, Ray Bradbury, Alan Kay, Diane Ravitch and Alvin Toffler.

“Our design was thought out technically. It’s easy to come up with fancy buzzwords and crazy ideas, like ‘the computer is going to be intelligent and somehow be magically wired into my brain,’” Dr. Skiena said. “We spent a lot of time looking at technical feasibility, what technologies would mature and what wouldn’t mature.  We guessed right on a lot of things. One thing we said was that people would not routinely talk to their machine. We didn’t think voice recognition would be quite accurate enough and socially acceptable. If you’re communicating with your tablet by speech, you can’t take it to Starbucks. Imagine the racket of everyone babbling to their computers? For the most part, our design was technically and socially sound.”

According to the University of Illinois, the team’s paper stated that their computer would “fit comfortably into people’s lives while dramatically changing them.”  Among the team’s predictions:
•    The computer of 2000 will “have the same dimensions as a standard notebook,” and “look like an 8 ½” x 11” monolith from the movie 2001.”
•    The interface would be “a high-resolution touchscreen that yields slightly to the touch”
•    The best input device would be a stylus, with an on-screen keyboard, permitting “the ultimate integration between text and graphics”
•    Handwriting recognition software would be available to convert handwritten notes to type
•    A high resolution color display would support video and video communications
•    Notably, the computer of 2000 would not be based primarily on speech recognition. “Science fiction seems to specialize in talking to computers and listening to what they say,” remarked the authors. “However, people do not really want to talk to computers. In many contexts where a portable computer would be used…talking out loud is not an acceptable behavior.”
•    Peripherals like keyboards, video cameras, and GPS would connect via infrared interfaces

As part of the first place prize, the University of Illinois received a $20,000 computer lab from Apple. Dr. Skiena spent that summer after receiving his Ph.D. working at Apple, and then began teaching at Stony Brook.

“The Apple competition was obviously very exciting to us at the time. Our design made a certain splash. A lot of people were thinking about what computers would be like,” he said. “Our team members have kept in touch over the years, and whenever someone sees a piece of technology reminiscent of we came up with, we send e-mails back and forth.”

“The excitement caused by Steve’s tablet wining the Apple’s competition back in 1988 was the primary reason why we hired Steve as a professor in our department,” said Arie E. Kaufman, Distinguished Professor & Chair, Computer Science Department. “We have been very pleased by his stellar accomplishments and numerous inventions since then.”

Steven Skiena, Ph.D., was appointed Distinguished Teaching Professor in the Department of Computer Science at Stony Brook University in May 2009. Since he joined Stony Brook in 1988, Professor Skiena has received numerous honors for teaching expertise, including the President’s Award for Excellence in Teaching and the Chancellor’s Award for Excellence in Teaching. Dr. Skiena is a Fulbright Scholar and the recipient of both the ONR Young Investigator Award and the NSF Research Initiation Award. His book The Algorithm Design Manual earned him the IEEE National Computer Science and Engineering Undergraduate Teaching Award.

Professor Skiena has received more than $4 million dollars in federal research funding, has made significant contributions in the area of algorithm design, particularly in applied algorithms and computational biology. He developed new DNA sequencing assembly techniques to sequence the genome of Borrelia burgdorferi, the bacterium which causes Lyme disease, and is a pioneer in the new world of synthetic biology. His work on designing and synthesizing new viruses to serve as vaccines in collaboration with virologists at Stony Brook University has been published in the journal Science.