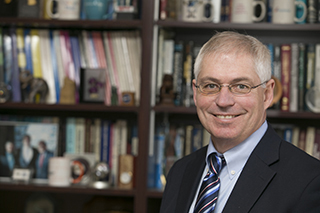 STONY BROOK, NY, January 24, 2014– Stony Brook’s William Worek, PhD, received the American Society of Mechanical Engineers’ (ASME) Edwin F. Church Medal, a high honor of achievement that recognizes eminent service in increasing the value, importance and appeal of mechanical engineering education. Worek was honored for the development of new courses in combined heat and mass transfer and the establishment of a master of energy engineering program that gives students the tools to design, execute and manage new energy projects.
The Edwin F. Church Medal was established in 1972 from a bequest of Edwin F. Church, Jr. (1879-1964), loyal member of ASME, devoted supporter of ASME student activities, dedicated teacher, and for 32 years as a professor of mechanical engineering and head of the department at the Polytechnic Institute of Brooklyn.

“It is always an honor to be recognized by your peers for accomplishments,” said Prof. Worek.  “I would like to thank my nominator and those who supported my nomination.  The genesis of the masters of energy engineering program recognized the need of qualified energy engineers with advanced skills and the design of the program enabled engineers to expand their skills while still working.  I am proud of the program’s acceptance and its success.”

Worek, Associate Dean and Professor in the Department of Mechanical Engineering and Associate Professor of Research and Graduate Studies in the College of Engineering and Applied Sciences at Stony Brook University, is a recognized expert in heat and mass transfer, fluid flow and thermodynamics, as applied to energy efficient, renewable and sustainable energy systems.

“The award of the Edwin F. Church Medal recognizes Professor Worek’s knowledge in the energy discipline and his commitment to educating the next generation of energy engineers,” said Yacov Shamash, Dean of the College of Engineering and Applied Sciences. “I congratulate him on the receipt of this prestigious award.”

Worek’s research interests include the development of new desiccant materials for cooling systems applications, modeling of sorption processes and the experimental testing of desiccant material performance. In addition, he has investigated liquid absorption processes in both open- and closed-cycle systems and methods to enhance heat transport in refrigeration systems. He also has worked on design and operational strategies to realize net zero energy buildings in northern climates and holds three patents on energy system design and operation resulting in performance improvements. He has also investigated the heat transfer enhancement when nanofluids are boiled.

Worek is the American editor for the Applied Thermal Engineering Journal, associate editor for Energy-the International Journal and coordinating editor for Heat Transfer Asian Research. His technical publications number more than 120, many of which were presented at international conferences and invited presentations worldwide. He holds three patents with three pending.

An ASME Fellow, Worek is a member (2012-15) of the Board of Governors; and since 2002 has been serving on the Society’s Homeland Security Steering Committee. Previously, he was vice-president of the Energy Resources Board (2002-05) and chair of the Solar Energy Division (1993-94).

Worek is also a Fellow of the American Society of Heating, Refrigerating and Air-Conditioning Engineers.

Worek was a University of Illinois at Chicago (UCI) Fellow (2001-02) on the Committee on Institutional Cooperation’s Academic Leadership Program; he received the UCI College of Engineering’s Harold A. Simon Award for Excellence in teaching (2000).

He earned three degrees at the Illinois Institute of Technology, Chicago: his bachelor’s in mechanical engineering with high honors in 1976; and his master’s degree and PhD in mechanical and aerospace engineering in 1977 and 1980, respectively.