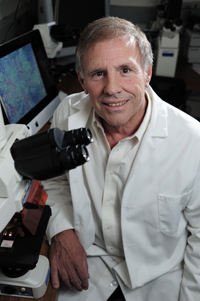 STONY BROOK, NY, January 18, 2011 — Three Stony Brook University professors – Jorge L. Benach, Ph.D., Jessica Gurevitch, Ph.D., and Dmitri E. Kharzeev, Ph.D., have been named 2010 American Association for the Advancement of Science (AAAS) fellows, and will be recognized for their contributions to science at the Fellows Forum to be held on 19 February 2011 during the AAAS Annual Meeting in Washington, D.C.

Currently Chair of the Stony Brook University Department of Molecular Genetics and Microbiology and Director of the Center for Infectious Diseases, Dr. Benach’s career has focused on the area of vector-borne diseases, particularly in the area of spirochetal infections. In 1983, Dr. Benach brought recognition to the University and School of Medicine when he made the landmark discovery of identifying and isolating Borrelia burgdorferi as the organism that causes Lyme Disease.

A past Fulbright Scholar, Dr. Benach has served as a member of the Advisory Council of Allergy and Infectious Diseases of the National Institutes of Health (NIH) from 1997 to 2001. He presently holds a Merit Research Award from the NIH.

Professor and Chair of the Stony Brook University Department of Ecology and Evolution, Dr. Gurevitch’s research interests are in plant ecology and statistical applications in ecology. Her work has largely focused on population and community ecology. Major current interests are plant demography in disturbed environments, the ecology of biological invasions, and meta-analysis in ecological research.

co-edited book, The Design and Analysis of Ecological Experiments (Scheiner and Gurevitch), went through two editions and has influenced a generation of young ecologists. Dr. Gurevitch is also known for carrying out important fieldwork in plant population and community ecology, and her work has been highlighted in several ecological textbooks.

Dmitri E. Kharzeev, Ph.D., Professor of Physics and Astronomy at Stony Brook University and a prominent scientist at Brookhaven National Laboratory (BNL), was selected AAAS fellow for his “distinguished contributions to the field of theoretical nuclear physics, specifically the understanding of relativistic heavy ion physics.”

Dr. Kharzeev has focused his theoretical research on understanding the properties of quark-gluon plasma, the type of matter that is thought to have existed at the first millionth of a second after the Big Bang. Currently, he is connecting the physics of RHIC to cosmology in his investigation of the role of fundamental symmetries in the structure of the universe.

Dr. Kharzeev has led BNL’s Nuclear Theory Group from 2004 to 2010. A Fellow of the American Physical Society, Dr. Kharzeev earned a Ph.D. in physics from Moscow State University in 1990. After working as a research associate at the Italian Institute of Nuclear Physics and at CERN, the European Organization for Nuclear Research, he joined Brookhaven Lab.

Samuel L. Stanley, Jr., M.D. “Jorge Benach, Jessica Gurevitch and Dmitri Kharzeev are deserving recipients of this highly regarded distinction. They are outstanding scientists whose creativity and dedication to research and teaching is reflected in an outstanding body of work.”

The election as an AAAS fellow is awarded to individuals by their AAAS peer members. The nomination process starts with a steering group from the particular AAAS section a person is part of, and each steering groups recommendations are then voted on by the overall AAAS Council, the policymaking body of the Association. The tradition of awarding the distinction of AAAS Fellows began in 1874.

Benach, Gurevitch and Kharzeev are three of 503 members honored as 2010 AAAS fellows for their scientifically or socially distinguished efforts to advance science or its applications. New Fellows will be presented with an official certificate and a gold and blue (representing science and engineering, respectively) rosette pin.

Part of the State University of New York system, Stony Brook University encompasses 200 buildings on 1,600 acres. In the 53 years since its founding, the University has grown tremendously, now with nearly 24,000 students and 2,100 faculty, and is recognized as one of the nation’s important centers of learning and scholarship. It is a member of the prestigious Association of American Universities, and ranks among the top 100 national universities in America and among the top 50 public national universities in the country according to the 2008 U.S. News & World Report survey. One of four University Centers in the SUNY system, Stony Brook University co-manages Brookhaven National Laboratory , joining an elite group of universities, including Berkeley, University of Chicago, Cornell, MIT, and Princeton, that run federal research and development laboratories. SBU is a driving force of the Long Island economy, with an annual economic impact of $4.65 billion, generating nearly 60,000 jobs, and accounts for nearly 4% of all economic activity in Nassau and Suffolk counties, and roughly 7.5 percent of total jobs in Suffolk County.

The American Association for the Advancement of Science is the world’s largest general scientific society, and publisher of the journal,
Science
as well as
Science Translational Medicine
and
Science Signaling
. AAAS was founded in 1848, and includes some 262 affiliated societies and academies of science, serving 10 million individuals. Science has the largest paid circulation of any peer-reviewed general science journal in the world, with an estimated total readership of 1 million. The non-profit AAAS is open to all and fulfills its mission to “advance science and serve society” through initiatives in science policy; international programs; science education; and more. For the latest research news, log onto EurekAlert!, the premier science-news Web site, a service of AAAS.