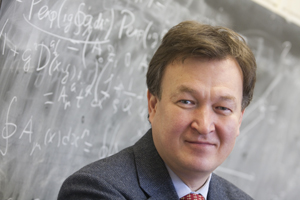 Dmitri E. Kharzeev, Ph.D., conducts research at Stony Brook and Brookhaven National Laboratory that investigates the symmetries in super-dense matter and in the Universe

Brookhaven National Laboratory, has been named a Fellow of the prestigious American Association for the Advancement of Science (AAAS) for his “distinguished contributions to the field of theoretical nuclear physics, specifically the understanding of relativistic heavy ion physics.”

“I am humbled by the honor bestowed upon me by the AAAS, the world’s largest scientific society,” said Dr. Kharzeev. “I am also very grateful to my colleagues at Stony Brook University and Brookhaven National Laboratory for their generous support, and to the Department of Energy for funding my research.”

Dr. Kharzeev’s research deals with “the fundamental symmetries of nature, and the ways in which the breaking of these symmetries at micro-scales in super-dense matter can affect the present-day universe,” he said. “Specifically, six years ago I proposed the possibility that the symmetry between left and right (so-called ‘parity invariance’) could be locally broken in quark-gluon plasma, and that this symmetry breaking should manifest itself in the asymmetry in the emission of charged particles in heavy ion collisions at the Relativistic Heavy Ion Collider (RHIC)” at Brookhaven National Laboratory.

Experiments at RHIC, in which the Stony Brook professors are heavily involved, have recently found evidence of this effect, as reported earlier this year in The New York Times .

Those experiments involved using the RHIC to accelerate gold nuclei around a 2.4-mile underground ring to just under the speed of light and then colliding them in order to melt protons and neutrons and free their constituent quarks and gluons. The scientists had been trying for years to achieve a state of matter known as quark-gluon plasma, which is believed to have existed at the birth of the universe.

The process involved defying a law of physics known as parity, in which there is symmetry between left and right.

“The mechanism by which the symmetry between left and right is broken in super-dense matter is thought to be very close to the mechanism by which the symmetry between matter and anti-matter was broken in the Early Universe,” said Dr. Kharzeev. “Without the breaking of this symmetry, the matter and anti-matter would annihilate in the early moments of the Universe’s existence leaving behind only radiation – and no material to build the stars, planets and humans.”

Other articles regarding Dr. Kharzeev’s work and RHIC findings include Newsweek (2010); New Scientist (2010); and,
Discover
magazine (2010).

Dmitri Kharzeev received his Ph.D. in particle and nuclear physics at Moscow State University in 1990. He then spent two postdoctoral years in the Italian National Institute of Nuclear Physics, three years in the Theory Division at CERN in Geneva, Switzerland, and a year at Bielefeld University in Germany. In 1997 he joined the newly created RIKEN-BNL Research Center at Brookhaven National Laboratory under direction of Prof. T.D. Lee, a Nobel laureate.

In 2000 he became a scientist with tenure at BNL. He was head of the Nuclear Theory group there from 2004 to 2010. Under his leadership, the BNL group has become the highest ranked nuclear theory group in the U.S. National laboratories system. Since 2007, he has also been an adjunct professor at Yale University.

In 2010, Dr. Kharzeev became a professor at the Department of Physics and Astronomy at Stony Brook. He continues to hold the Senior Scientist appointment at BNL.

Dr. Kharzeev has been a Fellow of the American Physical Society since 2006. In 2004 he was named an Emilio Segre Distinguished Scholar and a Sackler Fellow. He is an editor of Annals of Physics, a managing editor of International Journal of Modern Physics, and a current member of the Nuclear Science Advisory Committee for DOE and NSF.