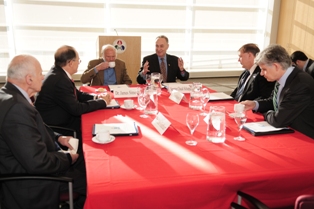 From a press release issued by the Office of United States Senator Chuck Schumer (D-NY):

between Stony Brook University, Brookhaven National Laboratory, and Cold Spring Harbor Laboratory, to establish a regional innovation cluster on Long Island that would create high-paying jobs focused on the development of advanced technologies. A new regional innovation cluster (RIC) for Long Island, championed by Schumer, will coordinate research and development efforts among these major institutions to attract both public and private investment and commercialize cutting edge technologies in the life science, biotechnology, and smart energy fields. As part of his effort to promote the new RIC, Schumer is inviting members of the White House Regional Innovation Cluster’s Working Group, to conduct a site visit to Long Island to meet with representatives of the three partnership institutions.

“Long Island is home to three of the greatest research institutions in the country and by combining their efforts in the development of cutting edge research and technologies, these institutions have the potential to create a jobs juggernaut for Long Island,” said Schumer. “The collaboration and cooperation between the three institutions will be an attractive source of investment from both the public and private sectors.”

“This welcome and timely pledge from Senator Schumer to establish the Stony Brook University, Brookhaven National Lab and Cold Spring Harbor Laboratory research triumvirate as a target for Federal support is a smart, strategic response to our nation’s economic challenges, and advances our country’s mission to be more competitive in research and discovery on a global level. Federal support, already important for our institutions, is essential for the next steps toward a strong and viable economic engine for Long Island, New York State and the United States.

“With support over many years from the State of New York, SBU, BNL, and CSHL have shown what can be accomplished through collaboration at this level. Together we have made major breakthroughs in research on cancer, the biomarkers applicable to central nervous system diseases and bioimaging/bioinformatics. Yet this is just the tip of the iceberg of our potential for the commercialization of new technologies. State funding is currently supporting three joint scientific conferences in the areas of energy, neurosciences and cancer.

“We are poised to provide an exciting, powerful new platform of national significance to enhance research and innovation in the areas of diagnostic and therapeutic healthcare as well as alternative and renewable energy and wireless technology. Support from the White House Regional Innovation Cluster initiative would bring a welcome wave of momentum to this collaboration that would build excitement and greatly enhance our effectiveness.

“New York State leadership has long recognized that our research collaborative is uniquely poised to advance scientific and research initiatives. Strategic investment at the Federal and State levels will absolutely move us forward as we pursue the type of leading edge discovery that will result in innovations that will save lives, and technology transfer that will drive the economy, create good jobs, and help create new public and private investment opportunities to Long Island, New York State and the United States.”