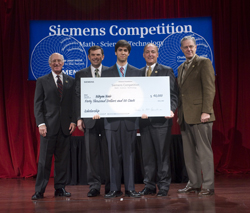 STONY BROOK, N.Y., January 13, 2009 – Nityan Nair, a senior at Hastings High School in Hastings-on-Hudson, New York, was awarded 3rd place and a $40,000 scholarship by the Siemens Competition in Math, Science & Technology for his individual project “Diffraction With A Twist: Forming Fractional Optical Vortices Using Spiral Zone Plates.” Nair spent this past summer at Stony Brook University conducting research on optical vortices under the mentorship of Dr. John Noe, Executive Director of the Laser Teaching Center in the Department of Physics and Astronomy.

“Manipulating the mathematics behind optical vortices and Fresnel zone plates allowed me to design and produce what are called spiral zone plates — patterns of transparent and opaque rings,” said Nair. “When laser light was passed through these patterns, different types of optical vortices could be formed.”

Optical vortices are beams of laser light that have a twist in their phase or wave-structure, and can be thought of as whirlpools in laser light. They have current or potential applications in nanomechanics (trapping and manipulating particles on the nano scale), searching for extrasolar planets, and quantum computing.

“Nityan’s work demonstrates a simple and inexpensive new way of making certain types of optical vortices, which may facilitate the further study of these interesting phenomena,” said Dr. Noe. “He chose this project himself and pursued it very independently, motivated by curiosity and a desire to test his sophisticated computer models through hands-on experimentation. He showed great dedication by commuting by train six hours a day after the conclusion of the Simons Research Program.”

“We are very proud of Nityan Nair and his accomplishment,” said Stony Brook University President Shirley Strum Kenny. “Our faculty have an extraordinary record of mentoring Siemens winners over the years. As an institution, Stony Brook cares deeply about talented high school students who will become our future scientific leaders, and we work hard to give them every opportunity to explore their abilities through such programs as the Simons Research Program.”

“The competition was really exciting and besides receiving a $40,000 scholarship, I also got the chance to meet a lot of very nice people and see the interesting work that they had done,” said Nair. “I thank Dr. Noe for his help and dedication.”

Nair is currently the Secretary General of the Westchester Model United Nations Conference and the president of his school’s math club. Two of his essays have been selected for publication by the American History Summer Institute. Mr. Nair plays the xylophone and varsity tennis. He plans to study physics or engineering in college and hopes to become a research scientist.

Fifteen Siemens Competition regional finalists and 18 semifinalists were mentored at Stony Brook University this year. Twelve of the regional finalists and 11 semifinalists were mentored by Professor Miriam Rafailovich of the Department of Material Sciences & Engineering in the School of Engineering and Applied Sciences, who is one of the nation’s leading mentors of research competition talent. In addition to Dr. Noe and Dr. Rafailovich, the 2008 Siemens mentors include: Dr. Benjamin Chu of Chemistry; Dr. Nancy Hollingsworth of Biochemistry & Cell Biology; Dr. Iwao Ojima of Chemistry; Dr. Carlos Simmerling of Chemistry; Dr. Marcia Simon of Oral Biology and Pathology; and Dr. Wei Zhu of Applied Mathematics & Statistics.

Nair and four other Siemens winners were Simons Fellows in the 2008 Simons Summer Research Program. The program was established in 1984 by Jim Simons, former chair of the Stony Brook University Mathematics Department, and is supported in part by the Simons Foundation. The 23 regional and semifinalists mentored by Dr. Rafailovich were participants in the summer research program offered at the Garcia Center for Polymers at Engineered Interfaces.

Each year, Stony Brook University ranks among the leaders in universities nationwide that mentor high school researchers. Last year, the Grand Prize winners in the team category of the Siemens Competition in Math, Science & Technology were high school students working with Chemistry Professor Iwao Ojima in the Institute for Chemical Biology and Drug Discovery. One of this year’s Siemens semifinalists, Christine Shrock, a senior at Ward Melville High School (Setauket, NY) was mentored by Dr. Carlos Simmerling in the Department of Chemistry, and was selected to receive a $50,000 Davidson Fellow scholarship for her work on protein research related to a potential treatment for HIV.